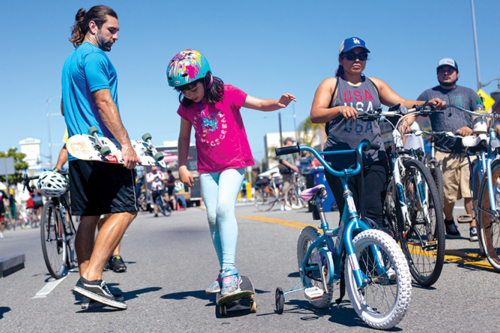 More than six miles of streets in West Hollywood, Hollywood and East Hollywood will become recreational space for CicLAvia’s “Meet the Hollywoods” on Aug. 18.

CicLAvia began in 2008 as a grassroots campaign by individuals who wanted to address “active transportation, urban land use and public health needs in Los Angeles,” according to its website. It was also inspired by the ciclovía events in Bogotá, Colombia.

CicLAvia spokesman Shawn Dhanak said tens of thousands of people are expected to participate. CicLAvia provides attendees with a chance to walk, bike, run or skateboard their way through the streets, from the Barnsdall Art Park Hub in East Hollywood to the West Hollywood Hub between South Vicente Avenue and La Cienega Boulevard.

“We are always looking to go to different areas … this will be the first time it will go through West Hollywood, connecting to Hollywood and East Hollywood,” Dhanak said. “In that area, there’s a ton of historic landmarks and restaurants.”

CicLAvia provides participants a chance to turn busy streets into recreational areas, Dhanak said. Designated areas will include a rock wall and board games. Businesses along the route will see an increase in visitors, Dhanak said.

“When you take time along a route, you’re likely to come across a business you didn’t know was there,” he said. “That was my experience.”

“As CicLAvia participants arrive in Hollywood via this car-free route, I am excited for Angelenos to experience all the landmarks that make this such an iconic area,” O’Farrell said. “Whether it’s the Hollywood Boulevard National Historic District, the Hollywood Walk of Fame, or the communities of Thai Town and Little Armenia, this route features one-of-a-kind neighborhoods and attractions.”

“I’m so pumped to welcome CicLAvia ‘Meet the Hollywoods’ to West Hollywood this weekend,” Horvath said. “It’s a long time in the making and a perfect event for our city rated most walkable in California to continue building our partnership with L.A. Metro. I’ve participated in past events around the county and have seen how they can bring people together, while reimagining how we use our public spaces and move through our community.”

The event is free and open to the public and will take place from 9 a.m. to 4 p.m., although the street closures will be longer.

After Sunday, the next CicLAvia event will be “Heart of L.A.: Celebrating UCLA 100,” which will take participants through Westlake, Chinatown, Little Tokyo, Boyle Heights and Downtown Los Angeles on Oct. 6.