CicLAvia rolls and walks its way through WeHo, Hollywood 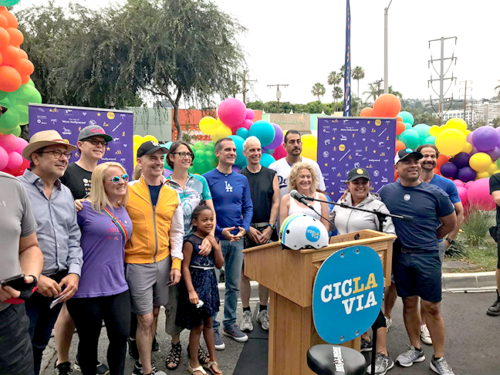 Elected officials from across Los Angeles, West Hollywood and Beverly Hills were among the 100,000 participants of CicLAvia’s “Meet the Hollywoods” event on Sunday. (photo courtesy of Los Angeles City Councilman Mitch O’Farrell)

Streets in West Hollywood and Hollywood were motor vehicle-free as CicLAvia’s “Meet the Hollywoods” cleared a path for over 100,000 cyclists, skateboarders, walkers and runners on Sunday.

“The spirit of West Hollywood and Los Angeles is about inclusion,” CicLAvia Executive Director Romel Pascual said. “It’s about bringing us all together as one community.”

CicLAvia closed a 6.5-mile stretch of portions of Highland Avenue, Hollywood Boulevard and Santa Monica Boulevard to vehicles from 7 a.m. to 6 p.m. Without a starting point or finish line, participants played board games, visited shops and restaurants, and rode along the route.

Sunday’s event marked the 32nd CicLAvia since 2010 and the fourth of six CicLAvia events in 2019.

“The event …was incredible,” CicLAvia spokesman Shawn Dhanak said. “Smiles flowed for miles from WeHo to ‘EaHo’ … I think a lot of people gained a deeper understanding of West Hollywood, Hollywood, East Hollywood, Thai Town and Little Armenia with this new route.”

Beverly Hills City Councilwoman Lili Bosse also participated in CicLAvia. She and her husband rode bicycles from their home along Santa Monica Boulevard to join their “neighboring city.”

“CicLAvia is one of the best events in Southern California,” she said. “It’s fun to have the street with no cars and with thousands of people on bikes and walking, walking with their dogs [and] families with strollers. It’s a good mood with lots of smiling and it’s very friendly.”

Bosse said she plans to join the next CicLAvia event and hopes CicLAvia is one day held in Beverly Hills.

CicLAvia’s “Heart of L.A.,” on Oct. 6, will celebrate the UCLA’s 100th birthday and will cross through parts of Chinatown, MacArthur Park and Boyle Heights. CicLAvia’s final 2019 event, “The Valley,” will be on Dec. 8 and will close streets in parts of Reseda, Winnetka and Canoga Park.

Looking to make a splash