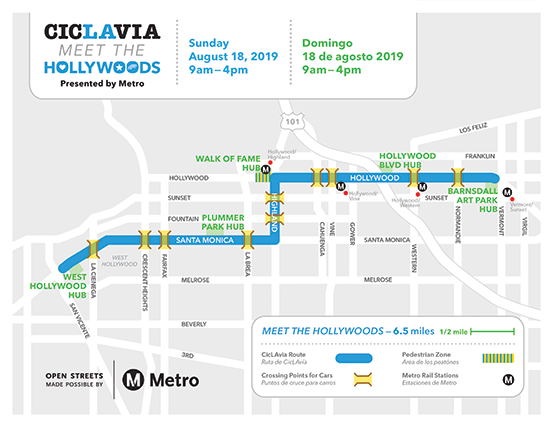 On Aug. 18, CicLAvia’s Meet the Hollywoods will transform 6.5 miles of streets in West Hollywood, Hollywood and East Hollywood into public recreational space for the day. From the Hollywood Walk of Fame to West Hollywood’s rainbow crosswalk, everyone is invited to walk, bike, roll and stroll through some of L.A.’s most iconic streets.

This CicLAvia, presented by Metro, lasts from 9 a.m. to 4 p.m. The free event will close portions of Hollywood Boulevard, Highland Avenue and Santa Monica Boulevard to motorized vehicle traffic so that people using all forms of human-powered, non-motorized transport can explore parts of Los Angeles County in a way they normally cannot.

CicLAvia is not a race, and there’s no starting point or finish line – Angelenos can begin where they’d like and enjoy the day their way. CicLAvia traffic flows in two directions, just like regular traffic.

“As CicLAvia rolls into West Hollywood, we’re overjoyed to be a host city and welcome everyone for this next edition of the tradition,” West Hollywood Mayor John D’Amico said.

“I have long sought to bring CicLAvia to West Hollywood,” Mayor Pro Tempore Lindsey Horvath said. “I am thrilled for our city and community to share in the joy of CicLAvia – with families and friends connecting in new ways.”