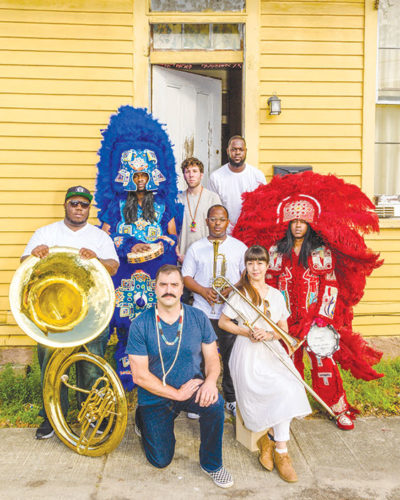 The Sunset Concerts series at the Skirball Cultural Center continues with a performance by the Grammy-nominated ensemble Cha Wa on Thursday, Aug. 8, at 8 p.m. The concert also features Dr. Fuzzy, who will start the evening with a DJ set at 6:30 p.m.

Dating back to the late 1800s, the Mardi Gras Indian tradition began when African American men first marched in Native American dress through the streets of New Orleans on Mardi Gras day. The tradition, which includes songs that were shared, remains an important part of the Mardi Gras experience.

“We dress up in the Indian suits to pay homage to the Native American Indians, because around the time of slavery, they were the first ones to take us in,” Boudreaux said. “Everything on our suits is handmade – the beads, the patterns, we sew together pieces of fabric and make the panels, we make the boots – everything.”