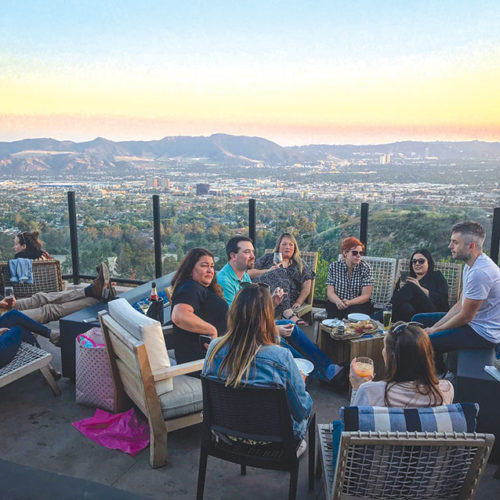 The views at Castaway are beautiful, especially at sunset before the city’s colorful twinkle lights appear. (photo by Jill Weinlein)

Some of my fondest summer dining experiences are sitting on the patio at Castaway in Burbank overlooking the city of Los Angeles. At the newly renovated restaurant, guests can create memories of their own at the country club-style restaurant, which offers 180-degree views of downtown and the San Fernando Valley, including a perfect view of the sunset before colorful lights twinkle in the darkening sky.

This iconic restaurant and event destination was closed for many years before the owners invested millions of dollars and hired Executive Chef Perry Pollaci.

Sitting on the al fresco dining terrace – one of the most coveted spots during the summer – one feels as if they are on vacation. The level below offers an outdoor lounge with fire pits and a glass-in balcony that is a favorite photo opportunity spot.

We started with complimentary sourdough Parker House rolls, which are filled with cloves of garlic and sun-dried tomatoes and are topped with chopped basil and course sea salt. The soft pull-apart rolls are served with whipped ricotta and basil, almost like a creamy pesto.

A chef at the bar makes appealing cheese and charcuterie boards all night long. We ordered a cheese board of French St. Andre triple cream cow’s milk cheese, a Spanish Rulo de Cabra goat cheese, and Red Dragon mild cow’s milk cheddar cheese. The goat cheese was torched to give notes of crème brûlée on top. The cheddar was enhanced with mustard seeds and Welsh brown ale. Thinly sliced apples, a handful of dried apricots, pickled vegetables and some candied walnuts accompanied the plate with thick triangles of grilled bread.

A new raw bar serves a variety of chilled oysters from the West and East coasts with an ancho chili cocktail sauce and Asian pear mignonette. The Ora king salmon poke drizzled with a citrusy yuzu ponzu comes with seaweed salad and crispy flatbread to scoop up the fish. For larger parties celebrating a special occasion, the imperial seafood fruit of the sea platter offers an array of fresh oysters, shrimp, snow crab, lobster, Jonah crab, Peruvian scallops and salmon poke for $175.

Castaway’s offerings are listed on a clever script-like menu that has “Confidential – For Your Eyes Only” stamped on the cover. Flipping through, we ordered an item or two from each page. On the “Prologue” page, which states “Don’t wait for the main event,” we chose the heirloom tomato gazpacho, which is yin and yang-like in both color and flavor profile with a brick-red heirloom tomato gazpacho next to a yellow heirloom tomato puree. On top were sliced summer peaches, a sprinkling of microgreens and drizzle of horseradish crema. 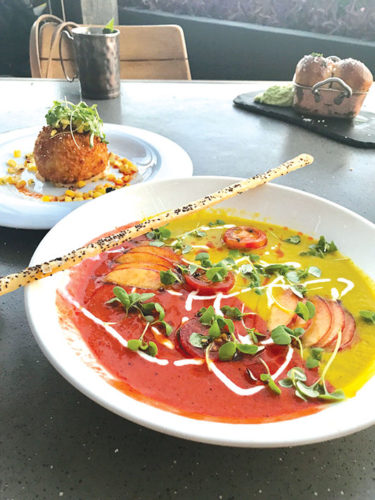 A quintessential summer dish, the gazpacho heirloom tomato soup is topped with sliced peaches and microgreens. (photo by Jill Weinlein)

Other “Prologue” items include charred Spanish octopus, which is served with crispy potatoes and a grilled piquillo puree, and glazed New Zealand lamb bacon, served with hummus, cucumber yogurt and mint.

Pollaci grew up in the restaurant world, helping his parents with their eateries at a young age. By the time he turned 12, he found himself bussing tables, washing dishes and prepping, often taking cues from his grandfather, also a chef. Later, Pollaci found himself working with some of New York City’s most renowned chefs, including Michael Mina, Richard Farnabe, Caesar Ramirez, John Johnson and Geoffrey Zakarian. He was executive chef at the Royce at the Langham Huntington Hotel in Pasadena and at the popular Studio City restaurant Firefly.

Summer is a time for grilling and in “the Butcher’s Block” section, Pollaci has included an American wagyu 7-ounce skirt and 7-ounce New York brick-cut steaks. The meat comes from responsibly-raised Kuroge Washu, or Japanese Black, and is served with sweet garlic chips and a shallot marmalade.

Other popular menu items are the California Flannery Beef, dry-aged American Holstein 8 oz. hanger steaks and a 32-ounce Jorge steak that plenty for two people to share. The 48-ounce tomahawk steak, which comes from black Angus cows raised at Creekstone Farms in Kansas, is large and can be shared with four people.

I also ordered one of the new summer vegan entrees: roasted “scallops” that arrived with on a beautiful thick green asparagus puree with five caramelized King Trumpet mushrooms. Their seared golden tops look just like scallops from the sea, and they’re served with a potato mash and long Chinese green beans.

Desserts include a molten lava chocolate cake with a scoop of vanilla, dark chocolate and white chocolate pearls, chocolate dust and candied walnuts. The Yellow Submarine is made with key lime cream folded into a puffed pastry, with a light meringue and raspberry gel. Both are over the top delicious.

The chef’s table for 10 guests is available on Friday and Saturday evenings. It begins with a cocktail in the hidden Green Room, a popular and comfortable Hollywood-style elegant lounge. Guests are escorted to a special table near the kitchen to experience Pollaci’s six-course seasonal tasting menu and an optional wine pairing. The chef’s table is ideal for special occasions, anniversaries, birthdays, date nights, girls’ nights out or business dinners.  Reservations are recommended for view dining and the chef’s table, especially during the summer. $$-$$$