Bridging the gap between homeless and help 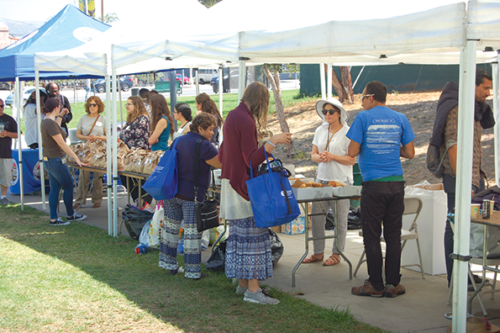 At tents, trailers and buses around the park, people experiencing homelessness could find food and water, get new clothes and take a shower. They also could be screened for health problems, including vision issues and HIV and other sexually transmitted diseases, and work with staff from Los Angeles City Attorney Mike Feuer’s office to find a way to resolve low-level offenses in exchange for accepting services and housing.

Ryu said he was pleased with the turnout, the latest in a handful of similar events he’s hosted in his district.

One “big win,” Ryu said, was a man who’d expressed interest in entering treatment for substance abuse but had then lost contact with service providers. The man came to Pan Pacific Park and reconnected with services, which thrilled volunteers in attendance, Ryu added.

“It’s about how many more of those stories [can Connect Day create],” he said.

“They gave me a nice change of clothes, and they gave me something to eat … They signed me up with mental health services [to get me] back to mental health, like I used to be,” she said.

Garcia, who said she lives “everywhere” and uses her tent as a blanket most nights, also connected with future services, including a way to wash her belongings the following night.