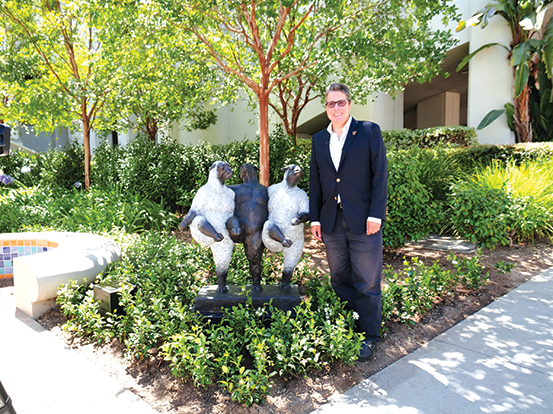 Beverly Hills Mayor John Mirisch said Giuseppe Palumbo’s sculpture “One More Time” was “a great symbol for community at its best.” (photo courtesy of the city of Beverly Hills)

Beverly Hills Mayor John Mirisch selected the sculpture as the Mayor’s Purchase Award from the spring Beverly Hills artSHOW and it was installed two weeks ago at the Rexford Drive entrance to Beverly Hills City Hall.

“I hope it makes people smile as they enter City Hall,” Mayor Mirisch said. “With the two white sheep at the ends and the one black sheep in the middle, the three sheep unite and find joy together. It’s a great symbol for community at its best.”

Known for what he describes as “serious whimsical sculptures,” Palumbo splits his time between his studios at a foundry in Berkeley and the art center he created in Eldorado Springs, Colo.

Palumbo began his career in construction and design before taking an art class in his 30s.   Through his design work, he wanted to go deeper into art after seeing people emotionally react. Palumbo said he was honored the Mayor selected his piece and placed it at City Hall as part of the city’s public art collection.

Ninety pieces of public art are on display throughout the city of Beverly Hills.