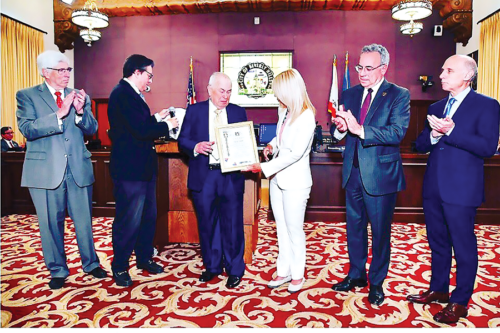 Councilmembers shared their dismay over the draft, which they said ignores Jewish history in the United States, fails to explain anti-Semitism, reinforces negative stereotypes and criticizes Israel.

The state Board of Education’s Model Curriculum Advisory Committee wrote the draft curriculum to align with guidelines about “cultural understanding of how different groups have struggled and worked together … [and] promote critical thinking and rigorous analysis of history, systems of oppression and the status quo in an effort to generate discussion on futurity and imagine new possibilities.”

Mayor John Mirisch said it was not clear if the changes to the curriculum were “an attempt to be [politically correct] or are about ‘wokeness’” and the draft was “not simply [anti-Semitic] … but it’s anti-Jewish.” Councilman Julian Gold added that the members of the state Board of Education who compiled the draft should be removed by Gov. Gavin Newsom. If Newsom does not remove those board members, Gold said Newsom must resign.

Along with the resolution, the council agreed to address the Board of Education in person.

“Whatever it takes to be really loud and clear. We can’t stand for hatred. I’m the daughter of a Holocaust survivor. I really feel I need to provide a voice for the millions of people no longer here. We need to absolutely stand up to racism and hatred,” Councilwoman Lili Bosse said.

The City Council has denounced anti-Semitism in the past, asking last year for people to boycott Airbnb over a decision to remove listings among Israeli settlements in the West Bank. In 2015, the city entered a joint declaration with Israel to promote economic development and strengthen relations.

Prior to the resolution’s passage, the council presented the Legacy Award to Beverly Hills resident and Holocaust survivor David Wiener.

On Aug. 14, State Superintendent Tony Thurmond met with California Legislative Jewish Caucus leaders to discuss the concerns about the model curriculum. In a statement, Thurmond said the draft curriculum required “a greater balance … to more accurately reflect the experience and contributions of Jewish Americans and to address anti-Semitism that has existed historically and that continues to persist in modern-day times.”

Public comments were submitted to the Instructional Quality Commission, which will review them and propose edits to the model curriculum’s next draft, due by Sept. 20.

“For the process going forward, the IQC will consider public comments and CDE-recommended edits at its Sept. 19-20 meeting,” Roark said. “The IQC may recommend a second public comment period based on discussion.”

The board will have to take action on the updated draft curriculum prior to the deadline for completion on March 31.

In a separate condemnation of the draft curriculum, the Los Angeles Museum of the Holocaust said it was pleased the state board will consider the curriculum. The museum looks forward to “a revised curriculum that meets the goal of alleviating prejudice and bigotry …”

“It is shocking that a curriculum that addresses bigotry and hatred of so many types, including Islamophobia, omits any discussion on anti-Semitism, which motivated a synagogue shooting in Poway only four months ago,” the museum’s statement read.

Highland Avenue median gets a little greener through partnership