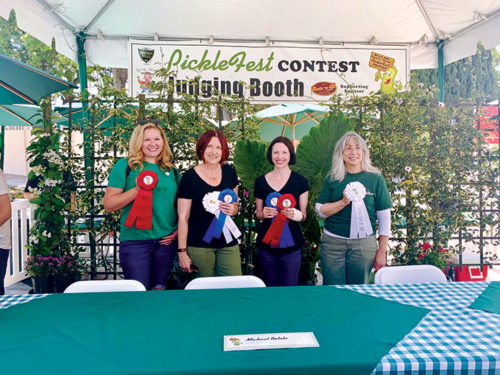 PickleFest winners Kim Lane, left, Mary McLaren, Jeanne Ackerman and Melani Shaum were the winners of the two categories during the 7th annual PickleFest. (photo courtesy of the city of Beverly Hills)

The crowd cheered for the 15 entries received from PickleFest contestants, who pickled everything from peaches and asparagus to traditional cucumbers.

“The entries were exceptionally delicious and beautiful,” Farmers Market Manager and event organizer Nica Mieloch-Blinn said. “We have a very passionate and enthusiastic pickling community and this is a favorite hometown event.”

The “I Can Pickle That” winners were Mary McLaren with her pickled asparagus in first place, Ackerman’s pickled peaches in second and in third place was Melanie Shaum and her gardiniere.

In celebration of the Farmers’ Market’s 25th Anniversary, Mayor John Mirisch gave recognition to the 11 farmers and vendors who have been with the market since 1994.  They include Rockenwagner, Kenter Canyon, Pudwill Farms, Mayeda Flowers, Bernard Ranches, Weiser Family Farm, Tenerelli Orchards, C Stars Nursery, Avila and Sons Farms, Sherrill Orchards Juices and Mis Padres Tacos. They each received a plaque and ribbon placed at their booths.