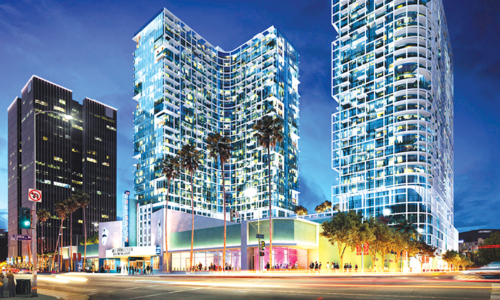 AIDS Healthcare Foundation has made headlines recently with its series of lawsuits aimed at preventing large, mixed-use developments in Hollywood. Now, the group is directing its sights on four projects at once, filing a new lawsuit earlier this month against the developers, the city of Los Angeles and the Los Angeles City Council for allegedly discriminating against Latinos in Hollywood.

Michael Weinstein, president of AHF, said four Sunset Boulevard projects – the Harridge Development Group’s Crossroads Hollywood, the GPI Companies tower planned for the site of Amoeba Music, Crescent Heights’ Hollywood Palladium Residences and CIM’s Sunset Gordon Tower – are displacing Latino renters in exchange for “high-end coffee shops and expensive restaurants, and apartments [that rent for] as much as $10,000 a month.”

Rob Wilcox, spokesman for Los Angeles City Attorney Mike Feuer, said the city attorney’s office will review the complaint and declined to comment further. Representatives for the development companies did not return requests for comment before press time.

The new suit, which was filed in addition to the suits against individual projects, takes a different tack than its predecessors, which mainly focused on land-use issues and the California Environmental Quality Act. Instead, the new lawsuit claims the Sunset Boulevard projects – and the city’s approval of them – violate the federal Fair Housing Act and the state’s Fair Employment and Housing Act. While the lawsuit is ongoing, AHF wants demolition and construction to stop on the project sites.

The lawsuit claims the developments are moving into an area that historically has been largely low-income and Latino. Weinstein said only a very small number of the hundreds of new units that will be built will be set aside for affordable housing, gentrifying the area and resulting in an “ethnic cleansing.”

“The Fair Housing Act was born of the civil rights movement, and this is very much a civil rights battle,” Weinstein said.

Tom Myers, general counsel and chief of public affairs for AHF, said the new buildings in Hollywood will profit the developers while they and the city did not consider the negative impacts of the projects.

“These policies are being implemented in a way that predictably is going to displace many people of color in the area. They’re externalizing the harms that are coming from these developments,” Myers said.

Liza Brereton, counsel for AHF, said a lawsuit making a similar “fairly novel” argument about the Baldwin Hills Crenshaw Plaza was allowed to move forward in May.

“Some people don’t quite understand the Fair Housing Act and think you have to prove a discriminatory intent … but that is not the standard,” Brereton said. “Oftentimes, discrimination can be unconscious bias. We just need to prove it has a disproportionate impact on racial minorities.”

Weinstein said AHF, which two years ago expanded its mission to include providing housing, is not trying to prevent new units from being built. Instead, the group aims to reduce gentrification and create affordable housing, the lack of which has been linked to the ongoing homeless crisis in Los Angeles and California. As part of that mission, AHF has repurposed old hotels to create new housing units.

“It’s not our goal to file lawsuits. It’s our goal to provide housing … when you’re in a hole, stop digging. It’s a desperate situation,” Weinstein said.