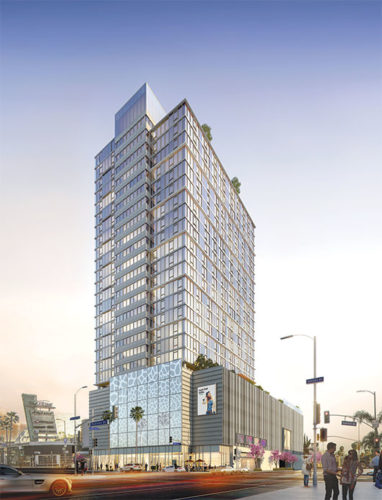 The AIDS Healthcare Foundation is seeking to stop the construction of a 26-story mixed-use building on the current site of Amoeba Music. (rendering by Johnson Fain/courtesy of GPI Companies)

Despite its approval by the Los Angeles City Council on June 25, the tower planned for the current site of Amoeba Music faces a pair of new hurdles.

AIDS Healthcare Foundation filed suit against the city of Los Angeles on July 22, alleging violations of the California Environmental Quality Act and other state and local laws. AHF also claims the project would destroy the Amoeba Music building at 6400 Sunset Blvd., which its lawsuit calls a “cultural resource” that contains “culturally significant murals associated with significant artists.” AHF and Coalition to Preserve L.A. have nominated the Amoeba building to be a historic-cultural monument.

“I think it’s one of the coolest places in Hollywood,” said Michael Weinstein, president of AHF.

GPI bought the building from Amoeba four years ago and has been leasing it back to the record store since then. Jim Henderson, co-owner of the music business, declined to comment for this story, but he previously told the Park Labrea News and Beverly Press that Amoeba, which has been at its current mural-decorated and neon-lit site since 2001, will relocate to another Hollywood location sometime in the next year. In the meantime, the music store’s doors remain open to customers, and signings and performances continue to be held in the Sunset Boulevard location.

Weinstein said his organization is not only trying to save Amoeba, but also opposes the project put forth by GPI Companies that would put a 26-story, 232,000-square-foot tower at the corner of Sunset and Cahuenga boulevards. The building will contain up to 200 residential units, of which at least 10 will be for very low-income households. There will also be 7,000 square feet of commercial space on the ground floor. AHF has challenged multiple developments in the past, such as the Crossroads Hollywood project that is also planned for Sunset Boulevard.

The building is likely to be mostly luxury apartments, Weinstein said, and “we don’t have a shortage of luxury housing.” What Hollywood and Los Angeles lack, Weinstein said, is affordable housing, and the project doesn’t have enough of it.

Cliff Goldstein, founder and managing partner of GPI, pointed out that as part of the 6400 Sunset project, the included affordable units are for very low-income households, a group many other projects don’t provide for. Goldstein said GPI will also provide $2.5 million to the Affordable Housing Trust Fund to build additional affordable housing in the Hollywood area.

“In total, I’m comfortable with the amount of affordable housing that this project provides, both on- and off-site,” Goldstein said.

Weinstein also objected to the building’s proposed architecture, designed by Scott Johnson of Johnson Fain. Weinstein said the architecture of most new buildings in Hollywood is “changing the character of the neighborhood and not for the better. It’s turning Hollywood into a rich ghetto.”

“We are systematically destroying what makes Hollywood interesting. It’s all on the altar of money and greed,” Weinstein added.

Goldstein, however, said he was pleased with the design by Johnson, whom he called “one of the top architects in the city.”

Weinstein acknowledged that the project’s opponents face an uphill battle, though he said slowing down construction has allowed AHF to negotiate with developers of previous projects to secure more affordable housing, as much as 25% of the whole project in some cases. Weinstein added that AHF is also repurposing old hotels like the Baltimore Hotel near Skid Row as housing for homeless and low-income people, creating approximately 600 housing units.

“We’re not just talking, we’re doing. We’re not just saying what we think should be done – we’re providing housing and getting people off the streets,” he said.