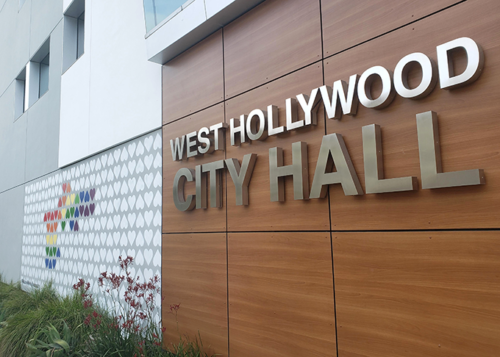 West Hollywood will host a reading of the Mueller report in August. (photo by Cameron Kiszla)

Anyone looking for more Robert Mueller after the former special counsel’s congressional testimony on July 24 can find it next month in the West Hollywood City Council chambers.

On Aug. 10-11, the Hollywood chapter of the National Organization of Women and the city of West Hollywood will host a live reading of the redacted version of the 448-page “Report on the Investigation into Russian Interference in the 2016 Presidential Election,” otherwise known as the Mueller report.

The reading is expected to take more than 20 hours, starting at 9 a.m. on Aug. 10 and at 10 a.m. on Aug. 11. John Erickson, president of Hollywood NOW, said more than 200 community members will be needed to read the report. So far, Erickson said more than 100 people have signed up, including West Hollywood City Council members, and the reading’s organizers are in talks with other local, state and national officials about participating.

“A lot of people have not read the report, so we’re encouraging many people to come and hear what needs to be discussed,” Erickson said.

The reading of the Mueller report will be free and open to the public, and those who wish to read will be given a two-hour block, during which they and their fellow participants will alternate taking 10- to 15-minute turns reading aloud, Erickson said.

The City Council approved its involvement in a 3-1-1 vote on July 15, with Mayor John D’Amico voting against the reading and Councilwoman Lauren Meister abstaining from the vote for reasons related to the city’s plan to broadcast and stream as much of the event as possible. The entirety of the reading cannot be shown because of its length and the limitations of livestreaming and broadcasting on different social media platforms.

During the meeting, D’Amico did not say why he voted no, but in a subsequent phone interview, D’Amico said he wanted to record a reading of the entire report, not just part of it. Because that’s not possible, what will be shown is “not an honest representation of the entire report,” he said.

“I don’t want to support a half-measure,” he said.

During the meeting, Meister expressed concern about the event’s cost, specifically what the city would pay to broadcast the reading, which would require an additional $1,500 for closed captioning and $2,500 for technical support. She suggested that the event’s organizers could find an outside group to sponsor the streaming costs, and the savings could be used to put on more events.

Councilman John Heilman pointed out even if the event were not broadcast, it would still cost the city $3,151 to waive parking fees, plus $500 for event insurance. Additionally, Councilwoman Lindsey Horvath said the city has paid to broadcast similar readings in the past.

Horvath said the July 24 Mueller testimony offers a different perspective than a reading of the report itself, something many cities and organizations across the country have been doing.

“I think the testimony that was highlighted [on July 24] by congressional questioning speaks to what congress members want to call out in the report,” she said. “I think it’s important for people to read the report for themselves and make their own decisions.”

Abbe Land, former member of the West Hollywood City Council, made a similar point during the July 15 council meeting when she spoke in favor of the reading, saying the event would help people decide what action, if any, would be appropriate in response to Russia’s alleged attempts to sway the 2016 election.

“This is a city I know that is always [trying to] ‘act locally, think globally,’ and has been a big part of the resistance. I think there is probably much in that report … for people to think about,” she said.

Kim takes you back to Saigon in Pantages production

Artful and flavorful fare at LN2

Looks like D’Amico’s no vote made zero sense. The whole report was recorded and can be found on YouTube. He owes the readers and organizers apology and needs to better understand what he is actually voting on before voting.