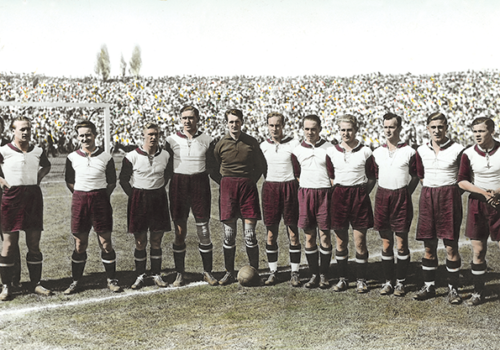 Starting July 16, the Los Angeles Museum of the Holocaust and soccer club FC Bayern Munich present the United States debut of a moving and powerful exhibit, “Venerated – Persecuted – Forgotten: Victims of Nazism at FC Bayern Munich.” The exhibit will be at the museum through September.

Curated by Germany’s largest club museum FC Bayern Erlebniswelt, the exhibit highlights the heart-wrenching stories of nine players and officials who were persecuted and murdered by the Nazis because of their religious or political views. It includes the remarkable saga of Kurt Landauer, the Jewish president of the club who was forced to resign his post and was imprisoned in Dachau. Following his exile, he returned to Munich after the war only to find his beloved team in shambles.

Landauer led the effort to rebuild the team’s stadium and the club, and today, he is remembered as one of FC Bayern Munich’s most important figures and an important contributor to the club’s success.

Admission to both the museum and the exhibit are free.

The Los Angeles Museum of the Holocaust is located at 100 S. The Grove Drive. For information, visit lamoth.org/exhibitions/temporary-exhibits/bayern.

VINTAGE: Cooling off on a hot day