‘Toy Story 4’ sends the gang off in style 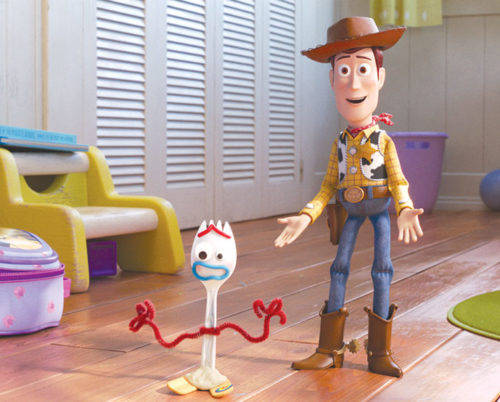 In 1995, the “Toy Story” franchise began a trend in film: the computer-animated feature. And almost 25 years later, Pixar finally says goodbye to some of animation’s most charming characters with the right amount of humor and feels to make every parent, guardian and child at heart nostalgic about all those inanimate objects from our more innocent days that came to life.

Andy grew up, went to college and gave all his childhood toys to little Bonnie (Madeleine McGraw), continuing the cycle of life. After two years, Woody (Tom Hanks) continues to struggle with his new role as support staff, no longer the favorite toy. But he still has much wisdom to offer, especially when Bonnie timidly prepares for the first day of school. All she needs is a little push, which Woody gleefully supplies in the form of arts and crafts left on a table.

Have you ever wondered how these toys develop sentience? All it takes is intent. Bonnie might not be allowed to bring toys to school, but when she puts googly eyes and pipe cleaner on a spork, Forky (Tony Hale) comes to life. A new toy life enters the world, and Bonnie’s transition into the next phase of childhood gets a little easier. Small problem: Forky prefers to end up in the trash; he’s a plastic spork, after all.

Of course, shenanigans ensue on a road trip, resulting in Forky and Woody’s journey back to the group. Along the way, however, they encounter an antique doll Gabby Gabby (Christina Hendricks), who never had the chance to play with a child because of a defective voice box. Alas, her sympathetic backstory turns creepy when she uses ventriloquist dummies to hunt down Woody for his mint-condition voice box. And the stuff of nightmares is born.

Luckily, Woody has trusted pal Buzz Lightyear (Tim Allen) on his side, along with a new team of toys, including Ducky (Keegan-Michael Key), Bunny (Jordan Peele) and Duke Caboom (Keanu Reeves), the greatest stuntman from the Great North, who favors splendid one-liners like, “Yes I Canada.”

More significantly, “Toy Story 4” marks the return of Bo Peep (Annie Potts), who unexplainably vanished come the events of the third installment. Her whereabouts will be explored, and the answer just might determine what’s next for Woody.

While the “Toy Story” franchise consistently and effectively concocts clever and entertaining films, few include this many laugh-out-loud gags. Thank Key and Peele for the best of those moments, but don’t underestimate Reeves. This is his year, from “John Wick 3” and an amazing cameo in “Always Be My Maybe” to a “Bill and Ted 3” announcement and Marvel’s plans to cast him in some capacity. As a comical Canadian stun toy, he continues his hot streak. 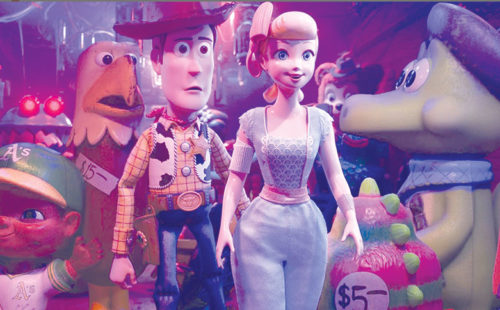 Woody (Tom Hanks) joins Bo Peep (Annie Potts) in Toy Story 4, after she unexplainably vanished in the third installment of the series. (photo courtesy of Pixar)

Major props, as usual, belong to the core voice cast. They perform admirably, but the story focuses mostly on Forky – Hale is amazing – and Woody, a wise move that allows screenwriters Andrew Stanton (“Wall-E,” “Finding Nemo”) and newcomer Stephany Folsom to explore a simple and simply wonderful tale. First-time director Josh Cooley, who previously wrote “Inside Out,” proves he belongs in the director’s chair at Pixar and beyond.

When Pixar announces plans for a sequel rather than an original story, it feels like the studio puts creativity on pause. “Finding Dory,” “Monster University” and two “Cars” films are easy examples. But the “Toy Story” films only seem to get better. Part 3 felt like a clear ending, and so does this one. What happens next is unclear, but at this point, the whole gang could get their own origin stories and maintain their quality. (Please don’t do this, but if you do, I’ll watch them all.)

“Toy Story 4” is an end to an era, one last link to the computer-animated film’s heyday. It’s a fitting conclusion that hopefully leads to more incredible films from a studio that rarely disappoints and often shirks expectation.