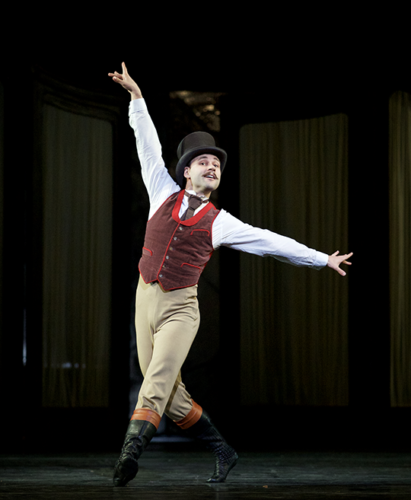 Alexander Campbell appears as Bratfisch in the Royal Ballet’s performances of “Mayerling” in the Dorothy Chandler Pavilion. (photo by Alice Pennefather)

From July 5 through 7, the Royal Ballet performs the masterpiece “Mayerling,” a three-act work depicting scandal and murder in the 19th century Austro-Hungarian Empire. The following week on July 12 and 13, the company will perform in “Adès & McGregor: A Dance Collaboration,” a partnership between the LA Phil and Glorya Kaufman Presents Dance at The Music Center. The dance performance combines the creative talents of Grammy Award-winning composer and conductor Thomas Adès and multi award-winning British choreographer Wayne McGregor.

“Although classical in nature with period costumes and romantic music, the Royal Ballet’s ‘Mayerling’ seemingly rips its storyline from today’s headlines instead of the 19th century, making its exploration of the human condition relevant to our times,” said Rachel Moore, president and CEO of the Music Center. “Thrilling and theatrical, this ballet’s dark and tortured dangerous liaisons make for an intense and spellbinding performance.”

“Mayerling” is a drama depicting dangerous desires, family secrets and political intrigue. The production is based on the true story of the 1889 deaths of the Austro-Hungarian Crown Prince and his teenage mistress. Dancers include Ryoichi Hirano, Matthew Ball and Thiago Soares as Prince Rudolf, and Natalia Osipova, Sarah Lamb and Lauren Cuthbertson as Mary Vetsera, with Francesca Hayward as Princess Stephanie. Tickets for “Mayerling” start at $34.

The Royal Ballet, as well as Company Wayne McGregor, will dance in “Adès & McGregor,” with the LA Phil under the baton of Adès. The performance includes the world premiere of “The Dante Project (Inferno),” a new work created for the Royal Ballet by McGregor. Tickets to “Adès & McGregor: A Dance Collaboration” start at $34.

The Dorothy Chandler Pavilion at the Music Center is located at 135 N. Grand Ave. For information, call (213)972-0711, or visit musiccenter.org.

Lake Arrowhead: It’s summertime and the water is high