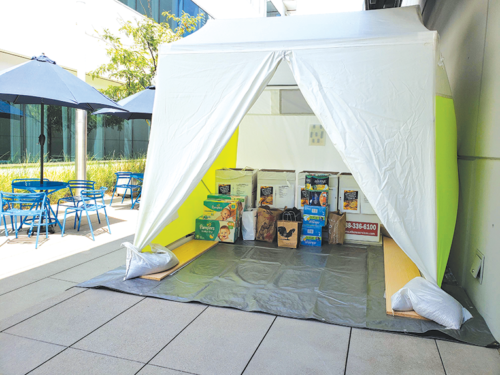 When the United States’ policies regarding detentions and family separations at the southern border came to light, West Hollywood resident Tai Sunnanon wanted to find a way to help the migrants, especially children and families.

As founder and CEO of the Strategic Insights Group, a Los Angeles-based consulting group that works with nonprofits and other socially focused leaders and groups, he knew just how to make a tangible difference.

In his nine trips to the southern border in Texas and California, Sunnanon said he has helped organize groups to provide medical and legal aid to those in detention centers and camps, but the migrants often have needs that are much more immediate. Many of the detention centers were built as processing centers, meaning they lack the ability to house people, so migrants – including children – don’t have access to showers, food and drinking water for long stretches of time, Sunnanon said, adding that his group believes “the health of the children is dire.”

“It’s important that people know the facts. I’m not here to debate the wrongfulness of it – I’m here to help people understand the facts,” Sunnanon said.

So Sunnanon is creating a “community-based game plan” to make a difference, organizing groups like the Coalition for Humane Immigrant Rights, Los Angeles; La Unión Del Pueblo Entero and the Salvation Army so they can help most effectively. Last month, the Strategic Insights Group collected more than 500 pounds of much-needed supplies like soap and shampoo, toothpaste and toothbrushes, baby food, diapers and feminine hygiene products for migrants, Sunnanon said.

Now, they’re working to gather more supplies for another trip to the detention centers in El Paso, Texas, on Aug. 2-4, where the Strategic Insights Group also plans to feed the migrants hot meals, which Sunnanon said the migrants wouldn’t get without the help of outside groups.

West Hollywood Mayor Pro Tempore Lindsey Horvath, who visited the southern border near San Diego last month, said she’s grateful the Strategic Insights Group is delivering aid to the migrants at the border, as “what’s happening there is pretty devastating.”

Horvath added that with the collection tent at City Hall, West Hollywood is continuing its tradition of providing aid to those in need. She said the city hosted a similar supply drive after the mass shooting at the Route 91 Harvest Festival in Las Vegas in 2017.

“In times of crisis like what people are experiencing at the border, it’s important for our community to step up and help,” Horvath said. “People are always looking for ways to get involved, and this is an easy way for people to get involved.”

After Aug. 12, Sunnanon urged people to donate to other groups that will continue to accept items to be sent to the detention centers, such as the Salvation Army.

“People are feeling empowered about collecting supplies, because it’s an easy thing for them to do … It’s pretty exciting,” Sunnanon said.