Suspects are caught on security camera during Hollywood burglary 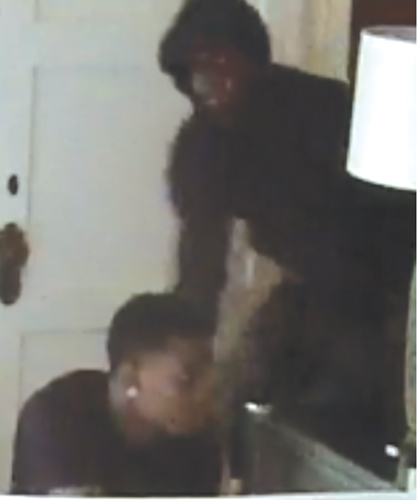 A security camera image shows the suspects committing the burglary at the Hollywood home. (photo courtesy of the LAPD)

The Los Angeles Police Department has obtained security camera images of two male suspects who burglarized a residence in the Hollywood on July 19.

At approximately 5:40 p.m., two suspects approached a residence near Hillside Avenue and North Ogden Drive. The suspects repeatedly rang the doorbell and after a few minutes, shattered a glass door.

The suspects ransacked the home and stole expensive watches and a Mac computer.

The suspects are described as black, 18 and 25 years old with thin builds. One suspect was wearing a dark hooded sweatshirt. The other suspect has short hair and tattoos on both arms. Anyone with information is asked to contact Hollywood Division detectives at (213)972-2929 or (213)972-2931.