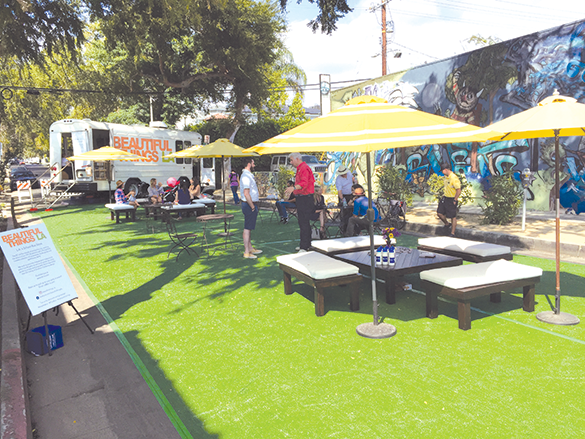 When the Mid City West Community Council closed a small section of Stanley Avenue just north of Melrose Avenue to traffic for one day in 2017 and created a public gathering space, many people stopped by and sat at tables in the shade under umbrellas, enjoying conversation.

The space was created as part of Park(ing) Day, an annual observance each September in which places normally used for vehicle traffic and parking are turned into miniature parks. The idea was well received among those who visited, said Mid City West Chairman Scott Epstein.

“People love it,” he added.

Now, the community council and the Melrose Business Improvement District are considering plans to create a similar public plaza at the site that would permanently close Stanley Avenue just north of Melrose Avenue. Plans call for tables, chairs and street furniture that would create a public gathering place during the day, but would be packed up and put away at night. The Mid City West Council and the Melrose BID are currently creating designs and gauging public opinion about the project, which has been selected for consideration by the city.

“The neighborhood is really interested in having more spaces to gather,” Epstein said. “We have a few large parks but don’t have a lot of public spaces where you can meet a friend or have a public meeting. That is the idea.”

The project’s organizers could receive a $200,000 grant if the project is approved by the city under the People St. program, which aims to create public spaces in areas previously reserved only for automobiles. Epstein cited the Sunset Triangle Plaza, located on a triangular piece of land in Silver Lake on Griffith Park Boulevard between Edgecliffe Drive and Maltman Avenue, as a similar site that has been very popular and well used. Having a space in the Melrose District where the public can gather would be beneficial for the neighborhood, he said.

The plaza’s design and details about how the street furniture would be removed each night and returned each morning have yet to be worked out, but it is tentatively planned that members of the BID would maintain the space. Public meetings will be held as the project moves forward, said Mehmet Berker, a Mid City West Community Council member who has been spearheading the project. Representatives of the Melrose BID were unavailable for comment.

Councilman Paul Koretz, 5th District, said he supports the concept of the public plaza but has not specifically endorsed the project, pending input from the community.

“[These types of spaces] generally seem to activate areas more. Anything that results in reduced crime and illegal activity is good. This was asked for by the Mid City West Community Council and the Melrose BID, and I think we should at least give it a try.”

The proposed project is opposed by some in the Melrose area, who contend permanently closing the street would hinder emergency responders. Opponents also fear the space would become a gathering place for homeless individuals or people who may be involved in illegal activity.

“It’s just ill-advised idiocy,” said Peter Nichols, founder of the Melrose Action Neighborhood Watch and a longtime Melrose area resident. “There have been some very serious crimes along the Melrose corridor that have been violent in nature. That particular corner is a constant draw for transient-related problems. Obviously, closing the street will impede the flow of traffic, and traffic is already at a crawl on Melrose Avenue on weekends. There are so many impacts of shutting a street down each day.”

Joan Fitzpatrick, a Stanley Avenue resident who lives one block north of the area where the plaza would be located, agrees with Nichols. She has spoken to many neighbors who are also opposed to the project.

“I have been door-to-door asking what they think and they all hate it as a matter of fact, except for two to three people,” Fitzpatrick said. “It’s going to create a lot of chaos.”

Berker reiterated that the project is in the early stages and there will be time for public input and changes could be implemented.

The place where the plaza is planned is currently just a street and Epstein argued that having activity there could improve the surrounding area. Having people present would deter crime, he added.

Berker said the goal is simply to activate an area where nothing currently exists.

“It’s a simple plaza. It’s a concept and a conceptual design,” Berker added. “The BID wants to do another public meeting soon to talk about the design. We think it would be good for the neighborhood.”

A glimpse at Hollywood’s Chinese-American history