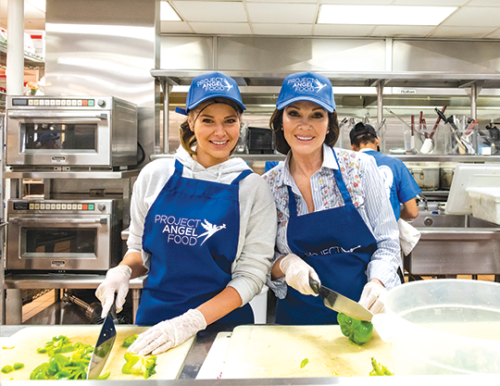 Vanderpump, who is executive producer and star of the reality television series “Vanderpump Rules,” was moved to tears upon witnessing the dedication of supporters, volunteers, staff and others who came together at Project Angel Food’s Hollywood facility prior to the meal being served to an individual in need.

“Project Angel Food is such a wonderful organization which relies on volunteers to prepare and deliver meals to people who are too weak or sick to care or cook for themselves, “Vanderpump said. “These individuals need these services to stay alive. I first became involved with Project Angel Food in late 1989, so when Richard called and asked me to deliver the 12-millionth meal, I was so honored and humbled.”

Vanderpump returned to Los Angeles from England after attending the funeral of her mother, Jean, to take part in the delivery.

“There is nowhere I would rather be than here,” Vanderpump added. “It is important that we do what we can to give back to the community.”

Vanderpump delivered the meal to the recipient’s apartment in Hollywood. The dedication and delivery to the 82-year-old man living with psoriatic arthritis were filmed for an upcoming episode of “Vanderpump Rules.”

How to safely get rid of unused medications