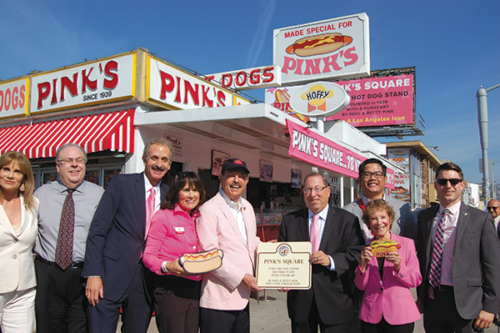 City officials were on hand at the official dedication of “Pink’s Square” in 2018. Pink’s is looking forward to National Hot Dog Day July 17, but don’t wait until then to bite into one of their famous hot dogs. (photo by Edwin Folven)

Pink’s, which will commemorate its 80th anniversary with an eight-night special celebration in November, encourages guests to enjoy an America the Beautiful Dog during National Hot Dog Month. It’s a 12-inch jalapeño sausage topped with pastrami, bacon, lettuce and chopped tomatoes – the perfect food this time of year said Richard Pink, who operates the stand with his wife Gloria and sister Beverly Pink-Wolfe.

“The America the Beautiful Dog is one of our classic dogs that we use to celebrate National Hot Dog Month. It’s become so loved, we serve them year-round,” Pink added. “They are the perfect hot dog to celebrate summer, baseball season and the Fourth of July.”

Pink’s opened near the corner of Melrose and La Brea in 1939 when Paul and Betty Pink (Richard and Beverly’s parents) started selling hot dogs from a pushcart. The dogs caught on quickly and Pink’s rapidly became a favorite destination for residents and visitors alike.

Throughout its 80-year history, the stand has become an icon on the Los Angeles culinary scene. Pink said people from all over the world tell him the stand is one of their first destinations upon arriving in Los Angeles.

Pink’s offers more than 35 different types of hot dogs – many of which are named after the stand’s former and current celebrity clientele such as Emeril Lagasse, Carl Reiner and Giada De Laurentiis. The stand also has hot dogs celebrating the city and its sports teams. Try an L.A. Chargers Dog (two nine-inch stretch dogs in one bun topped with mustard, chili, nacho cheese and French fries, and served with a side of onion rings), a La La Land Dog (a nine-inch stretch dog topped with guacamole, chopped tomatoes, bacon bits and a swizzle of sour cream) and a LAFC Dog (a nine-inch stretch dog with guacamole, American and Swiss cheese, sautéed peppers and onions, jalapenos and tortilla chips). Pinks also offers a dozen different hamburgers.

The city of Los Angeles honored the stand with a special honor last year, designating the intersection of Melrose and La Brea avenues Pink’s Square. Pink said National Hot Dog Month is a special time at the stand every year, just as National Hot Dog Day will be celebrated on July 17. More than 150 million hot dogs are sold each July in the United States, he said.

“Hot dogs are part of the American culture,” Pink added. “There are certain things that will never change, and one of them is the experience of enjoying a hot dog at Pink’s during National Hot Dog Month in July.”

Program will help women in jail find jobs after being released