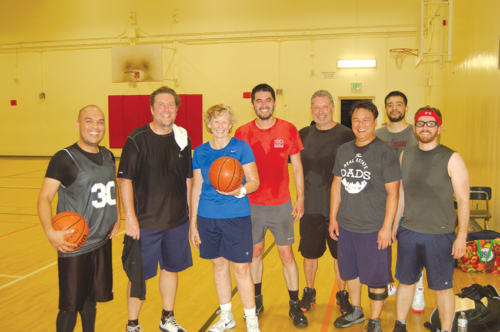 The squeaks of Air Jordans, the bouncing of rubber against wood and the swish of nylon nets fill the air most every Wednesday night at Fairfax High School.

From 8 to 10 p.m. in the school’s smaller gym, amateur players from all walks of life and across Los Angeles are drawn to a pick-up basketball game.

Over the past 30 years or so, the weekly get-together founded by television producer Barbara Brace has maintained a regular schedule, and almost every week, at least a handful of players gather to compete.

Older players or those with children who’ve been forced to stop attending as regularly have been quickly replaced by friends and friends-of-friends. The roster of players is loosely affiliated, and they sometimes are known to each other only by first names, with no last name or occupation added for context.

“If you’re coming in here to network, then you’re in the wrong place,” said longtime player David Kirkwood.

The rotating roster has allowed the continuation of what’s become a tradition for Brace, whom Kirkwood called “the heart” and fellow veteran Rob Bastian called “the glue” of the game.

“I really plan my week around Wednesday basketball,” Brace said.

Brace, 58, who is often the only woman playing, ignited her passion for the sport as a high school basketball player in Santa Barbara. She didn’t play while attending UCLA, but after graduation, she worked as a production coordinator on the TV show “The Facts of Life.”

At Sunset Gower Studios, home to “The Facts of Life,” Brace gauged her coworkers’ interest in basketball and invited them to pickup games, some of which included a young George Clooney, who acted on “Facts.” 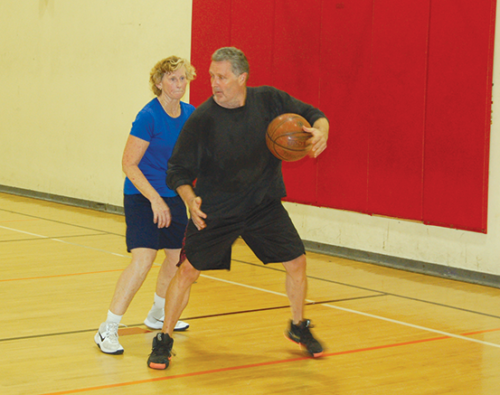 One of the early players in Brace’s orbit had a permit to use the girls’ gym at Fairfax High School, a permit Brace has since maintained. The gym was free to use back then, but now Brace pays to use the gym and acquires the recreation insurance required by the Los Angeles Unified School District. The costs can be a few thousand dollars a year, and Brace tries – sometimes unsuccessfully – to get regular players to pay their fair share.

“She’s probably lost a decent amount of money over the years, but I think she enjoys it, so she’s not too upset about it,” Kirkwood said.

Brace said having enough warm bodies to play the game trumps any recompense she might be seeking.

“Anything to keep the game going,” she said.

Through the three decades of the weekly get-togethers, the roster has expanded beyond the entertainment industry and now includes lawyers and real estate agents, too.

That’s not to say, however, that a recognizable face can’t be found pounding the hardwood at Fairfax High. Norm McDonald was a regular player for a while. Jaleel White, best known for playing Steve Urkel on “Family Matters,” had some “nice spin moves,” and Sam Lloyd, who played the lawyer Ted on “Scrubs,” was a “natural shooter” in his time in the gym, according to Bastian.

“You wouldn’t think it until they get out here, and all of the sudden, they come alive,” he said.

On a recent Wednesday night, the attendance was lower than expected based on the responses to the weekly invite. After about half an hour, a few more players showed up and the squad was able to play some full five-on-five games.

Despite the absences, the players were thrilled to play. For some, like 10-year veteran Eric Zimmerman, the game’s mere existence is something to be treasured. It’s fun and competitive, but doesn’t allow for arguing or unsportsmanlike conduct. And, if work or family pressures get too much, players can feel free to take care of what’s important and come back when they’re ready for more squeaks, bounces and swishes.

“That’s the thing about this game that’s nice; you can take six months off, then show up like you never left,” Zimmerman said.

Over the years, players have gotten younger, but Brace still shows up to sink some shots, grab some rebounds and play what she describes as “fundamental basketball.”

“The day I feel I can’t really keep up, I’ll quit. But for now, I feel like I can hang in there,” she said.