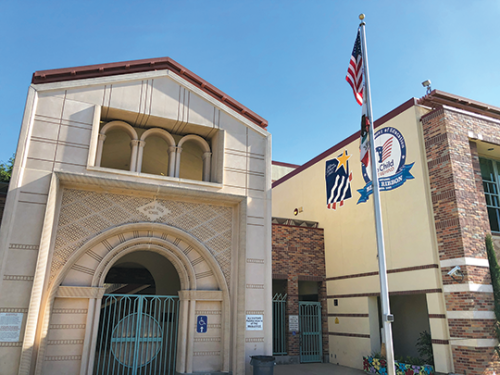 With the beginning of the 2019-20 school year rapidly approaching, the Beverly Hills City Council used a July 16 study session to discuss the upcoming changes to drop-off and pick-up areas at three local schools.

The campuses, Beverly Vista, Horace Mann, and Hawthorne, are seeing changes in enrollment because of the construction at El Rodeo School that will close the campus to students for two years. Instead of the traditional Beverly Hills Unified School District K-8 model, Horace Mann and Hawthorne will be K-5 schools, and Beverly Vista will be the new middle school for grades 6-8.

Hawthorne’s enrollment will rise slightly – approximately 570 students instead of 555 – but Horace Mann will see an increase from an expected 568 students to 719, and Beverly Vista is expected to grow from 716 students to 951.

With the enrollment changes, each school is opening a second entrance each morning and afternoon, and city officials have created signs to help ease confusion. The signs will look the same at each school, said Martha Eros, transportation planner for the city.

“Our goal was to have consistent signage, recognizing that there may be families that have multiple drop offs at different schools,” Eros said.

The Beverly Hills City Council expressed concerns about how the changes will affect traffic. Councilman Robert Wunderlich said he wishes more effort had been put into organizing carpools or encouraging students to walk or bike to school, cutting down on the number of cars.

“I’m kind of disappointed that those elements aren’t in [the city’s traffic mitigation plan],” he said.

However, other council members pointed out that geographic changes would make some of Wunderlich’s requests difficult.

“These schools were … neighborhood schools. You pretty much lived in the area and often walked. Now, you’re turning one school into a middle school where people are going to have to drive,” Councilwoman Lili Bosse said.

Councilman Julian Gold said modern concerns about safety could also discourage parents from allowing their children to bike or walk.

“I think there’s some hesitance to allow kids in today’s world to go unescorted. I think we have to deal with that issue as well,” he said.

Multiple council members said they would like to explore the idea of a shuttle program to ferry students, though Gold raised concerns that if enough people did not take the shuttles, empty buses would make traffic worse.

The council members told the BHUSD’s representative, Communications Coordinator Rebecca Starkins, that they would be monitoring the first few weeks of school to see if the traffic plan was effective.

“You only have one chance to make a first impression, so I hope the first days that we’re there, we make a good impression – or the best that we can – with the system that we have,” Vice Mayor Lester Friedman said.

Starkins told the council that the first day of classes is not likely to be indicative of the program’s success or failure, as parents often like to park and walk their children into schools. She added that the district is working to notify parents about the changes, including hand-outs for every parent at middle school orientation and at an elementary school pancake breakfast in August. The school district will also reach out through social media, email and its website, Starkins said.

“We know every parent receives information in different ways, and we need to address all of those mediums, and we’re doing that,” she said.