Musso and Frank celebrated on the silver screen 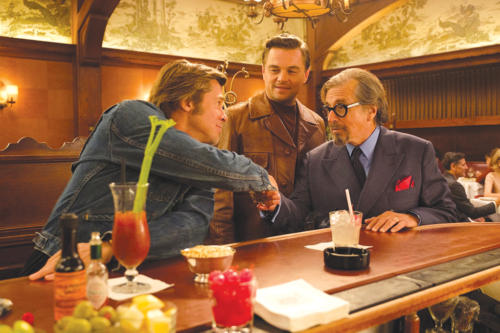 Actors Leonardo DiCaprio, Brad Pitt and Al Pacino appear in a scene from Columbia Pictures’ “Once Upon a Time…in Hollywood” that was filmed at Musso and Frank Grill in Hollywood. (photo by Andrew Cooper/©2019 CTMG, Inc. All Rights Reserved)

The iconic Musso and Frank Grill, which is celebrating its 100th anniversary this year, is featured prominently in a scene in the upcoming Quentin Tarantino film, “Once Upon a Time…in Hollywood.”

The film from Sony Pictures’ Columbia Pictures opens on Friday, July 26. It marks the most recent appearance of the famous Hollywood restaurant in cinema. Musso and Frank Grill first opened in 1919, and in 1922, Buster Keaton’s movie “Cops” became the first in a long series of feature films, and later TV shows, to use the restaurant as a venue for filming.

“I feel so lucky that there’s a place like the Musso & Frank Grill, one that exists now exactly how it has always been,” Tarantino said. “It was fantastic being able to shoot at an iconic landmark that is so authentic and connected to Hollywood.”

“Musso and Frank Grill is featured in a big way in the movie,” added Rick Schuler, supervising location manager for “Once Upon a Time…in Hollywood.” “This establishment encapsulates the history of Hollywood. It was a must-have location for Quentin, who sought to take us back to 1969 Hollywood, the Hollywood he grew up in and loved. While other establishments have come and gone, it was not so with Musso and Frank Grill. It has stood the test of time.”

The family that owns the restaurant has preserved nearly every detail. A major scene in “Once Upon a Time…in Hollywood” with actors Brad Pitt, Leo DiCaprio and Al Pacino was filmed at the restaurant.

“Quentin Tarantino is a truly visionary artist – not to mention just a great guy and a longtime fan of ours – who wanted Musso’s to not merely be a backdrop for his film, but a character in its own right – one that would perfectly embody the essence of Hollywood back in 1969,” said Musso and Frank CFO, COO and proprietor Mark Echeverria, a fourth-generation member of the family of owners. “We have never closed for five straight days in our 100-year history, but we did that last summer so he could shoot inside our restaurant. We made that exception because we love him and because we felt comfortable allowing him to do so. It was a pleasure working with him.”

Musso and Frank Grill is located at 6667 Hollywood Blvd. For information, visit mussoandfrank.com.