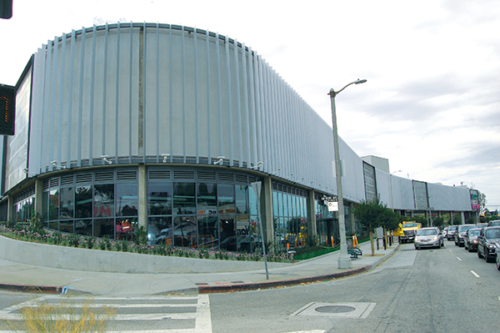 A Sprouts Farmers Market has already opened in a new development at San Vicente Boulevard and La Brea Avenue, where a Target store is also expected to open soon. (photo by Edwin Folven)

Construction crews continue to ready a new development on La Brea Avenue at San Vicente Boulevard where a Target store is expected to open soon, and a Sprouts Farmers Market opened on July 10.

The development at the southeast corner of the intersection will also include space for retail shops. The two-story building will have 300 parking spaces in a subterranean structure, as well as on a portion of the second level and the roof. Target has not announced an opening date.

“I can confirm Target has plans to open our Mid City store later this year,” Target spokeswoman Liz Hancock said. “We’re excited to bring an easy, convenient shopping experience to additional guests in the Los Angeles community with this new Target store. Located at 1302 S. La Brea, the store will be approximately 23,000 square feet. As we get closer to opening the store, we’ll have more specific details to share, including how the shopping experience will be tailored to serve local guests and the grand opening date.”

“The new retail center will not only create a swell of jobs in the area, but will also provide our surrounding communities with additional access to fresh and affordable groceries and diverse retail options,” Wesson said in a statement.

Sprouts market, the first company to open in the complex, will help meet a demand in the neighborhood for fresh, natural and organic foods, added spokesman Diego Romero. Few grocery stores serve the area. The closest stores are Ralphs supermarkets at Pico and Venice boulevards, Wilshire and Hauser boulevards, and La Brea Avenue and Third Street.

Sprouts Farmers Market also opened a new store at 8550 Santa Monica Blvd. in West Hollywood on July 31. The market opened in a new complex built at the site of the long-closed Athletic Club West Hollywood. The three-story project includes 25,000 square feet of space for the Sprouts Market and 1,500 square feet for a café with outdoor dining.

Also included is a 16,000-square-foot space for the Wing, a New York-based co-working firm for women. The Wing will offer conference space, booths, showers and areas for networking. The nearly completed project will also include rooftop parking and spaces in an adjacent, pre-existing garage.

West Hollywood Mayor John D’Amico said the new Sprouts Farmers Market in West Hollywood and the other spaces will be beneficial the city.

“It’s right behind my house, so I am personally excited to have another option for purchasing fresh food,” D’Amico added. “[For the] city, I think it will be a welcome addition to our community.