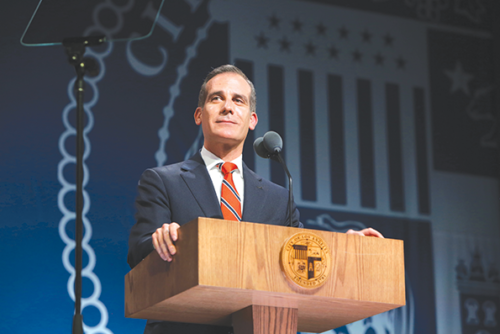 The power outage notification service will enable DWP customers to receive texts or emails when a power outage is reported in their neighborhood. In addition to alerts about a power outage, the DWP will also notify residents about estimated times for repairs and service restoration. Customers can receive English and Spanish alerts. Anyone can enroll in up to three neighborhoods within LADWP’s service area.

“The DWP is one of the most reliable utilities in the United States. But sometimes the power goes out, especially during our warm summer months, and it’s our job to let Angelenos know when the lights will turn back on,” Garcetti said. “As part of our ongoing work to improve and strengthen DWP’s customer service, this new text and email notification system will alert customers when outages happen in their neighborhoods and when service will be restored.”

Customers can sign up through their LADWP account by visiting ladwp.com and clicking the “Outage Alerts” tab.

“We are announcing a new system for directly communicating with customers about outages affecting them,” said DWP General Manager David Wright. “Last July, Los Angeles experienced extreme heat coupled with record-breaking electricity demand that resulted in prolonged power outages. That experience brought home the need for a message alert system to better inform customers of the status of outages.”

On July 6-9, 2018, temperatures reached triple digits in Los Angeles causing widespread power outages. Thousands of customers were without electricity, some for as long as 72 hours. The outages prompted calls from Councilmen Mitch O’Farrell, 13th District, and David Ryu, 4th District, for the DWP to have a better system in place to restore electricity more quickly and alert residents about when power will be restored.

Customers are encouraged to report outages as soon as they occur by calling (800)DIALDWP, and visiting ladwp.com/outages.