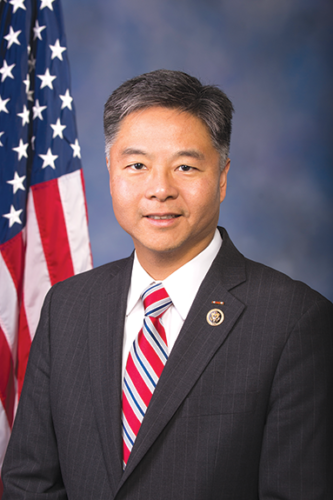 Conversion therapy fraudulently seeks to change an individual’s sexual orientation or gender identity, Lieu said. It has been recognized by a national assemblage of professionals in education, social work, health and counseling as dangerous and useless. Lieu authored the first ban on youth conversion therapy in the nation as a California state senator. U.S. Sens. Patty Murray (D-Wash.) and Cory Booker (D-NJ) introduced a Senate companion bill on June 27.

“Conversion therapy is a fraudulent practice based on the prejudiced belief that someone can or should change their sexual orientation or gender identity,” Lieu said. “It inflicts immeasurable harm on those subjected to it, and turns a profit for scammers posing as mental health professionals. When I introduced and passed the nation’s first youth conversion therapy ban as a state senator, I never imagined the momentum we would have to change laws on conversion therapy around the country. Now, 17 other states join California in having laws on the books banning the practice. Now it’s time to end this scam in all states and pass a federal ban.”

According to research, people who have experienced conversion therapy are more likely to attempt suicide than their peers. An Ipsos/Reuters poll found that 56 percent of adults in the U.S. support banning youth conversion therapy by mental health professionals.

“Being lesbian, gay, bisexual, transgender or gender non-conforming is not a mental illness to be cured and should never be treated as such. Conversation therapy is a sham – according to medicine and common sense – and is incredibly discriminatory and harmful towards members of the LGBTQIA+ community, especially children who already face increased harassment and discrimination,” Murray added. “While I’m proud of the example my home state of Washington modeled in banning conversion therapy years ago, we cannot rest until this despicable practice is banished to the dustbin of history across the nation. I am proud to stand with the LGBTQIA+ community against conversion therapy, and looking forward to working with Senator Booker and Representative Lieu to get this important legislation signed into law.”