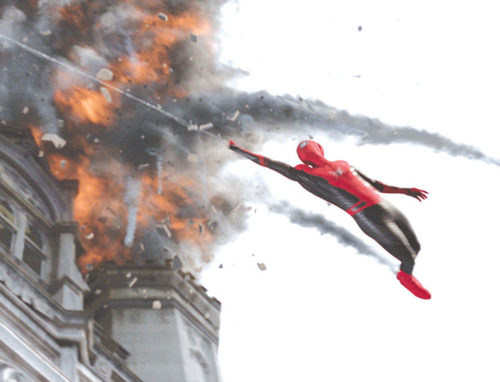 “Spider-Man: Far From Home” is one of the web-slinger’s best films to date. (photo courtesy of Sony Pictures/ ©2019 CTMG)

Bemoan the rise of superhero media all you want, but it ain’t going anywhere. I feel your pain, I truly do. Whenever football, basketball or baseball season arrive, a pretentious part of me goes, “Here we go again.” But then I shake from my selfish stupor, acknowledge that I don’t need to hate but simply ignore what I’m indifferent to and move on with my day.

From a more literal observation, superhero movies are far less repetitive than any sports event, so please redirect your hypocritical complaints, especially if they’re aimed at “Spider-Man: Far From Home,” one of the beloved web-slinger’s best outings to date.

As the seventh live-action film of Peter Parker/Spider-Man (don’t forget the hyphen and capital M, you crazies who still spell it “Spiderman”), I understand worries that Spidey can easily become stale. But following December’s breakout gem “Spider-Man: Into the Spider-Verse,” anything can happen. And for all Marvel Studios’ box office dominance, too many of its films rely on tiresome excess and generic villains.

But “Spider-Man: Homecoming” arrived with a much more modest story and rather sympathetic villain, thanks to director and writer team-up Jon Watts and Chris McKenna, who reprise their duties for a second time. “Far From Home” doesn’t recycle the formula of its predecessor. It continues the chronology of the Marvel Cinematic Universe, solving the sequel slump in the process.

Peter (Tom Holland) and many of his classmates returned from Thanos’ genocidal snap that wiped out half of all life in the galaxy. The “blip,” it’s now called. Five years have passed since blipping, but Spidey’s return is a matter of great joy for the folks of Queens. Alas, following several domestic, international and interplanetary conflicts, the high schooler needs a break. Luckily, a school trip to Europe takes him “far from home” (those filmmakers be so clever) and his pressing heroic responsibilities, especially in the wake of his deceased mentor.

Too bad Nick Fury (Samuel L. Jackson) doesn’t respect vacation boundaries, instead recruiting the youngest Avenger to work alongside the secret agent’s new team, which includes Quentin Beck/Mysterio (Jake Gyllenhaal), who hails from an alternate Earth. Creatures called the Elementals threaten the planet, prompting these two to jump into action, bonding about duel identities along the way.

This might be the driving plotline, but a Spidey story without romance rings wrong. Enter MJ. Things went south with Peter’s previous crush, but snarky, smart and strange classmate MJ (Zendaya) is his soulmate (my words, not his, based on decades of character fandom). If only Peter had the courage to tell her, and the freedom to do so without Fury blocking all his untested game. Perhaps love and action will collide. (Of course, they will.)

On brand, Holland kills as Spider-Man (don’t make me choose; Tobey, Andrew and Tom all have their perks). To the third Spidey iteration’s credit, maintaining a high school setting allows the eternally young Holland to explore all the anxieties and politics of youthful angst. And bestie Ned’s (Jacob Batalon) summer romance with aspiring news anchor Betty (Angourie Rice) drips with hilarious teenage self-importance to the point of parody. 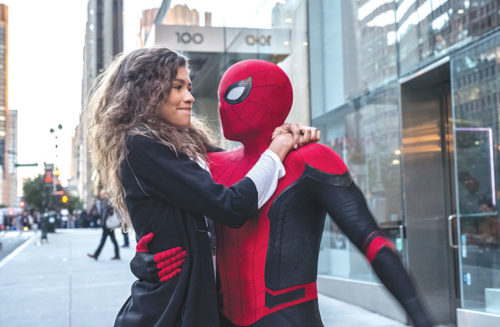 Gyllenhaal’s presence in a Spidey flick is both an obviously good choice and wonderful throwback to when the actor almost played the friendly neighborhood hero. (Speaking of throwbacks, prepare to laugh during the mid-credits scene). No spoilers, just be prepared for a unique depiction of the iconic Marvel character.

In truth, “Far From Home” is the closest we’ll come to a Scarecrow-style surrealist dream sequence in a superhero film (ignoring that brief tentacle-brain moment in James Gunn’s “Super”). The comics get weird all the time, especially when Batman’s hallucinogenics-loving nemesis sends the Caped Crusader into a Freudian dream sequence. Superhero films, however, are still shy in comparison. But we’re getting there. A primary complaint of “Far” is pacing: it doesn’t briskly move to the next action set piece with the ease of near-perfect espionage thriller “Captain America: The Winter Soldier.” That’s OK. While plenty of action transpires, Peter’s adolescent development, personal growth and romantic entanglement take center stage, which is truly a much-needed change of pace.

Garcetti: L.A. will fight to keep families together