Kim takes you back to Saigon in Pantages production 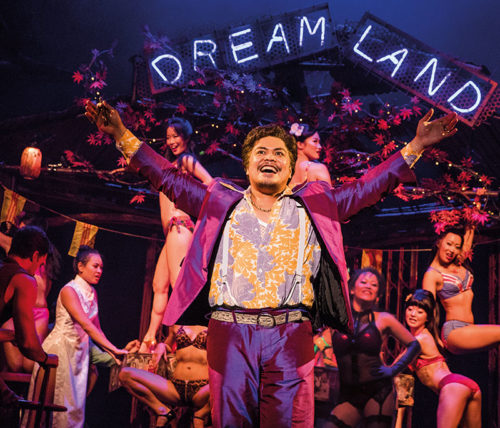 Red Concepción stars as “The Engineer” in the Hollywood Pantages production of Miss Saigon, now playing through August 11. (photo by Matthew Murphy)

“Miss Saigon,” opened at the Pantages Theatre on July 18, revisiting their production of the classic Broadway musical that first captured theater-goers’ hearts more than 25 years ago.

Set in 1970s Vietnam, “Miss Saigon” follows the lives of Kim, a young Vietnamese bargirl, and Chris, a disillusioned American Marine, as the Fall of Saigon looms ahead. In the days before the last Americans are extracted from Vietnam as the People’s Army captures the capital, a group of American soldiers find solace at Dreamland, a bar and brothel run by “The Engineer,” a sleazy and opportunistic pimp.

On the night Kim and Chris first meet at Dreamland, sparks fly, but soon their love story turns into a fight for survival. The show tells a timeless story of star-crossed lovers while also revealing the lasting repercussions and sorrow of the Vietnam War with pointed political commentary.

This production of “Miss Saigon” features highly impressive set design and two leads with excellent operatic vocals and powerhouse acting chops. The company includes many Pan-Asian and Asian American actors, highlighting how representation in casting is extremely necessary and also adds to the show’s meaningfulness. The experience as an audience member is visceral, deeply emotional, and at times overwhelming.

As I exited the theatre, I quipped, “I could use a little 42nd Street right about now.” However, after the initial emotional gut-punch wore off, I found myself earnestly reflecting on the implications and heartache of the Vietnam War for several days. While decidedly not uplifting, the show is deeply moving and elicits intense reflection — which is ultimately what we ask for from art.

A visit to the beautiful Art Deco trimmed Pantages to see “Miss Saigon” will be enjoyable, impactful, and lasting in memory. Now playing at the Pantages through August 11, show times are Tuesday – Saturday, 8 p.m. with a Saturday matinee performance at 2 p.m. Sunday shows are at 1 and 6:30 p.m. Tickets start at $49. The Hollywood Pantages Theatre is located at 6233 Hollywood Blvd. For more information and tickets, visit hollywoodpantages.com.