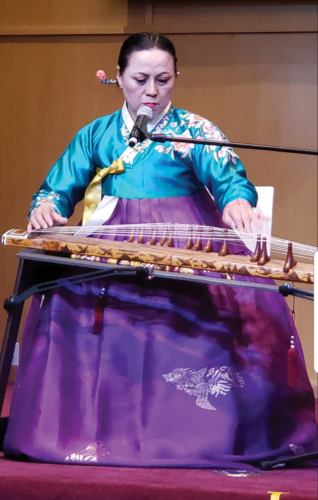 The concert will include Korean music performed on traditional instruments such as the gayageum. (photo courtesy of KCCLA)

The Korean Cultural Center Los Angeles presents “Tradition and Now,” a musical performance on Friday, July 26, at 7:30 p.m. in the center’s Ari Hall.

The concert will feature fusion Gugak (Korean traditional music) performances by popular artists and consists of two parts. The first starts with a gayageum ensemble and continues with traditional Korean dances. It also includes a performance called “Imyeong” choreographed and danced by Hansol Lee. Imyeong in Korean can symbolize an inner voice.

“If we could retranslate Imyeong into a dance, the sounds can be interpreted as a beautiful sound that moves our body,” Lee said.

The second part of the concert starts with a solo gayageum performance by Ji, Yun Ja, and continues with a fusion Gugak by Hyunsoo Ji and Rami Seo. The performance features an unusual but amazing ensemble of keyboards, flamenco guitar, gayageum and saxophone.

“We’re delighted to hold a fusion Gugak concert with Gugak as the cultural icon that connects the east and the west,” said Wijin Park, director of Korean Cultural Center, Los Angeles. “This will be chance for the audience to enjoy the music as well as learn about the beauty and excellence of Korean music.”

Gehry’s 8150 Sunset project is too large for the community