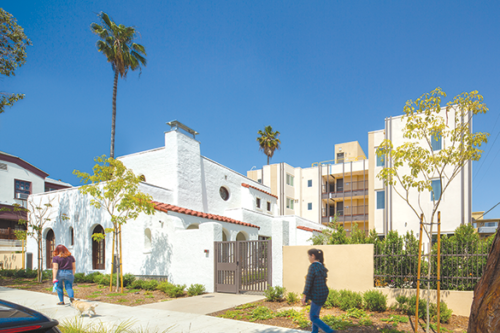 The apartment complex, which blends rehabilitation and new construction, is an example of urban infill and a sustainable approach to development. Killefer Flammang Architects incorporated an existing 1920s pueblo-style house into the design. The two-story house was completely renovated to provide two housing units. Behind it, two 4-story apartment buildings were built with 52 units.

The development contains one-, two- and three-bedroom apartments, as well as an underground parking garage. It is aimed at households earning at or below 60% of the area median income. Six units are reserved for extremely low-income households.

HCHC and KFA have prioritized sustainable design in Coronel Apartments. The building integrates many environmentally sustainable features including solar thermal water heating, drought-tolerant landscaping and energy efficient lighting and appliances. HCHC is seeking Platinum LEED-certification for the project, which is the highest level of distinction awarded by the U.S. Green Building Council.

The project is within walking distance of public transportation options, employment opportunities, grocery stores and health care providers. HCHC will celebrate the Grand Opening of the Coronel Apartments in August. For information, visit hollywoodhousing.org.

This street is one example of the cumulative impact of terrible land use policy which goes back decades. At one time before WWII, this street was filled with nice single family homes. Had post WW II city policy protected the low density of Hollywood, it would not have deteriorated into very undesirable place by the late 1960’s and early 1970’s. It was filled with rooming houses and abandoned places.

In the mid 1970’s, the city put in protections for decent housing, and in response Hollywood extending far into the Hills was rehabbed and came back to life until Garcetti became councilmember in 2001. Then a new decline began. Now Hollywood is a nightmare of excessive crowding combined with fraudulently high rents and home prices.

While people see the benefit of providing decent housing for people, they are focusing on one new tree and ignoring the thousand of mature Redwoods which Garcetti has destroyed and will continue to destroy. (Yes, Redwoods is used metaphorically)