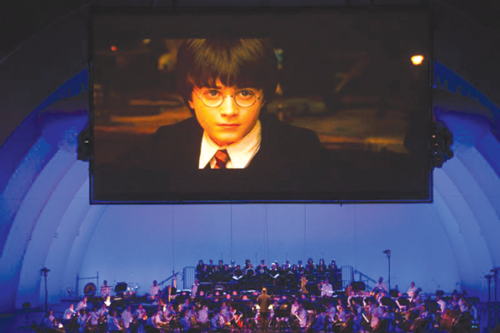 This summer, the Hollywood Bowl will show films with their soundtracks played by an accompanying live orchestra. (photo courtesy of the LA Phil)

The 2019 summer season at the Hollywood Bowl celebrates Academy Award-winning films and iconic music by some of the biggest names in film music, such as John Williams’ score for “Jurassic Park” and the music of George Gershwin from “An American in Paris.” Each film is shown in full on the bowl’s giant screen with the orchestra performing the music live.

On Thursday, Aug. 15, conductor David Newman and the LA Phil will take the audience to the moon with “America in Space,” celebrating the 50th anniversary of the Apollo 11 voyage with Hollywood film clips.

On Friday and Saturday, Aug. 16-17, the Bowl will show the original “Jurassic Park” with Newman leading the LA Phil in Williams’ iconic score.

The celebration of film music will continue with three nights of Maestro of the Movies, from Aug. 30 to Sept. 1, featuring famous selections from Williams.

On Thursday, Sept. 12, the LA Phil, conducted by Brett Mitchell, will present the digitally-restored “An American in Paris,” featuring Gershwin classics.

The 2019 summer season also includes the return of the annual “Sound of Music” Sing-A-Long and costume parade. This year’s event on Saturday, Sept. 21, will be hosted by Melissa Peterman.