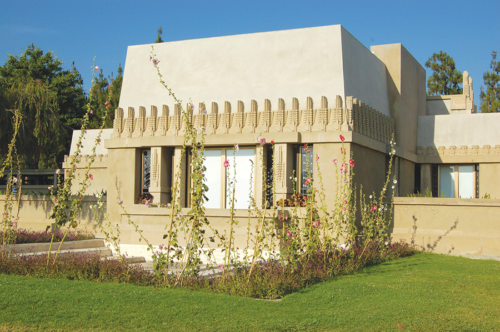 Hollyhock House, a unique residence designed by famed architect Frank Lloyd Wright and built in 1918-20 on a Hollywood hilltop property now known as Barnsdall Art Park, has been inscripted in UNESCO’s list of World Heritage Sites, along with seven other buildings designed by Wright throughout the United States.

In addition to Hollyhock House, the designation includes the Unity Temple in Oak Park, Illinois; the Frederick C. Robie House in Chicago; Taliesin in Spring Green, Wisconsin; Fallingwater in Mill Run, Pennsylvania; the Herbert and Katherine Jacobs House in Madison, Wisconsin; Taliesin West in Scottsdale, Arizona; and the Solomon R. Guggenheim Museum in New York City. Hollyhock House is the first and only property in Los Angeles on UNESCO’s World Heritage Sites list, and the only site in California. It joins the likes of the Statue of Liberty and the Grand Canyon.

“This recognition by UNESCO is a significant way for us to reconfirm how important Frank Lloyd Wright was to the development of modern architecture around the world,” said Barbara Gordon, executive director of the Frank Lloyd Wright Building Conservancy, an international organization dedicated to the preservation of Wright’s works. “Our hope is that the inscription of these eight major works also brings awareness to the importance of preserving all of his buildings as a vital part of our artistic, cultural and architectural heritage. All communities where a Wright building stands should appreciate what they have and share in the responsibility to protect their local – and world – heritage.”

The conservancy had been in the process of having Hollyhock House and the other Wright structures included on the list for the past 15 years. UNESCO has a long process for selecting the sites, said Joel Hoglund, communications director for the Frank Lloyd Wright Building Conservancy.

The conservancy prepared an application that was forwarded to the U.S. Department of the Interior, which submitted the application to UNESCO through the National Park Service. The World Heritage Committee first considered the Wright structures in 2016, and asked for more information. That was submitted in 2018, leading to the committee’s recent selection.

“It was really a challenge,” Hoglund said. “There are approximately 380 of his buildings still standing in the United States. It was a process of coming up with the best representations of his work.”

“This designation as a UNESCO World Heritage site underscores the significance of Los Angeles’ rich history of modern architecture. Frank Lloyd Wright’s Hollyhock House is a beloved masterpiece locally, and now a treasure worldwide,” O’Farrell said. “The inscription of this nomination marks the first modern architectural cultural property designation not only in California, but the United States. It has been a pleasure working with the Frank Lloyd Wright Building Conservancy and all parties in our efforts to preserve and restore the priceless cultural resources at Barnsdall Art Park.”

Hoglund said the designation is honorary but affirms the conservancy’s belief that Wright structures are architecturally significant and should be preserved. A plaque denoting the designation will be placed at Hollyhock House.

UNSECO based the designation on the sites having a prominent role in the development and evolution of modern architecture during the first half of the 20th century. UNESCO also considers sites’ “outstanding universal value.”

Hollyhock House is operated by the Los Angeles Department of Cultural Affairs and is open for self-guided tours from 11 a.m. to 4 p.m., Thursday through Sunday. Barnsdall Art Park is located at 4800 Hollywood Blvd. 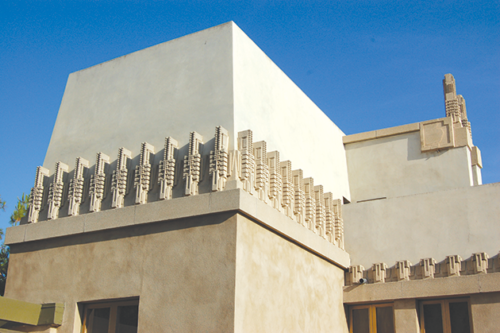 A philanthropist and art collector, Barnsdall deeded the land, including 5,000-square-foot Hollyhock House, to the city of Los Angeles in 1927.

The house served as the headquarters of the California Art Club from 1927-42. After a major restoration by the city completed in 1976, it became a public museum. The city completed another restoration of the property in 2014. Hollyhock House was among the first structures to be designated as a historic-cultural monument by the Los Angeles Cultural Heritage Commission in 1963. In 2007, it became a National Historic Landmark.

Wright (1867–1959) had an office in Los Angeles at the time when Hollyhock House was built and divided his time between California and Japan, where he was building the Imperial Hotel. Wright built Hollyhock House and two guest houses, one of which is currently undergoing restorations, at Barnsdall Park. The city also operates an arts center with a gallery and theater at the site.

“Hollyhock House is one of Los Angeles’ greatest cultural treasures, a landmark elegantly rendered from Frank Lloyd Wright’s imagination and Aline Barnsdall’s vision,” Mayor Eric Garcetti said. “The history of this home and its excellent craftsmanship will inspire Angelenos for generations to come, and Hollyhock House’s well-deserved place on UNESCO’s World Heritage List is a fitting tribute to this bold structure.”