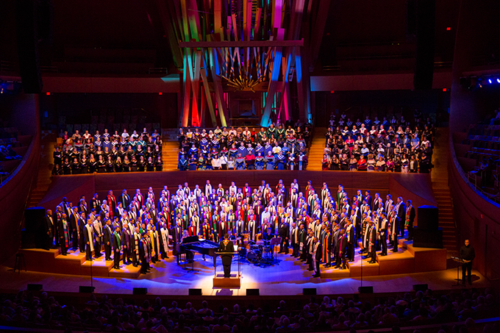 The GMCLA’s upcoming gala will feature over 500 performers, including members of the New York City Gay Men’s Chorus. (photo by Greg Zabilski/courtesy of Gay Men’s Chorus of Los Angeles)

The New York City Gay Men’s Chorus and 23 other choruses from across the country will also be performing with the GMCLA, with 500 singers in total. GMCLA’s 300 members and the other choruses will be led by interim artistic director Gavin Thrasher.

The performance will include a variety of songs, ranging from musical theater and film to choral music from the American canon, Spisto said.

Among those participating are the “First Nighters,” four of the original 99 chorus members from the very first GMCLA gathering on July 12, 1979, and civil rights activist David Mixner. Mixner will receive a lifetime legend award.

The show will also commemorate the anniversary of Stonewall with a performance of “Quiet No More: A Choral Celebration of Stonewall.” Recently at the Carnegie Music Hall in New York City, Spisto said the NYCGMC received a standing ovation.

“It’s an amazing testament to perform in the world we live in that’s evolved over 40 years,” Spisto said. “The strength and commitment by the men who founded it and stayed with it and raised their voices – our voices – in song and at times to speak up for others and to be part of the fabric of social activism.”

Spisto noted how the word “gay” could not be used in the Yellow Pages in 1979, and that men who had performed were afraid of being photographed, he said.

“That tells you where we’ve come,” he said.

GMCLA’s message for the LGBTQ community has evolved decade by decade. Going into the 1980s, GMCLA faced the AIDS crisis with performances held during memorial services and next to hospital beds, as well as for fundraisers, and marches in Washington, D.C., and elsewhere. With the 1990s came other causes for GMCLA to respond to through song, whether that was against the “Don’t Ask, Don’t Tell” policy or bullying toward gay and lesbian youth.

Since the start of the millennium, Spisto said the GMCLA’s efforts have focused on marriage equality. The chorus has also provided free programs for low-income youth and performed “wherever there’s [someone] in need,” according to Spisto.

“We’ll stand for a cause that relates to our community,” Spisto said. “The other part is we perform in schools throughout Los Angeles County for high school-aged young people where we sing and talk about who we are and lead by example.”

“It’s a great honor to be part of the organization at this critical time in our history,” he said. “Although our world is vastly different – for the better than 40 years ago for our community – there’s still challenges, but there’s a call to action here in L.A. We are needed to celebrate the beauty of our voices. We are needed to serve. As we look back on the last 40 years, we have to be mindful of the future, what we do today and tomorrow.” 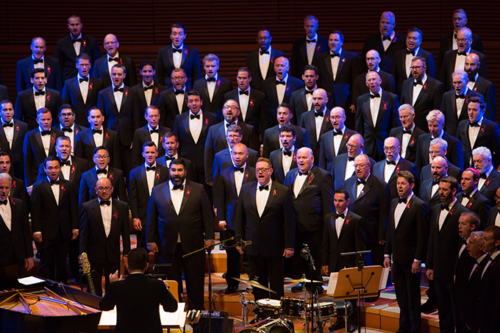 Even with a “show must go on” approach, GMCLA faced recent adversity. In February, the chorus was reportedly close to a potential dissolution due to a $200,000 budgetary gap. This followed accusations of sexual misconduct by former board president and former mayor of West Hollywood John Duran, and the resignation of Jonathan Weedman as executive director. Now in the latter half of the year, GMCLA is set to install conductor Jenny Wong as the organization’s first female artistic director to serve in the interim before a permanent replacement is found. Spisto made the appointment.

“With Lou, it’s about meeting and talking to people and it comes down to who’s best,” said consultant Patty Onagan.

Around the same time, the GMCLA also plans to begin its 41st season, with more years to come, Spisto said.

For information about the “GMCLA 40 / Stonewall 50” gala, visit gmcla.org/