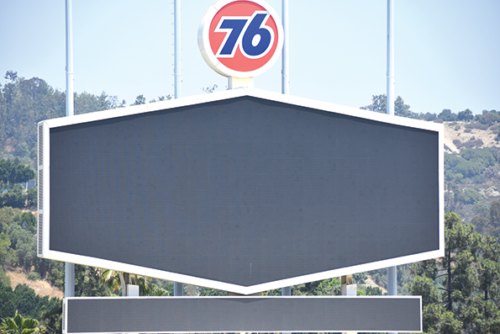 The 76 ball, first seen during the inaugural season at Dodger Stadium in 1962, has returned to its place at the center of the scoreboard, showcasing the long-standing connection between the brand and the ballpark.

It’s a connection literally built into the history of the park and the memories of many players, fans and other Los Angeles Dodgers greats.

The relationship between 76 and the Dodgers began when the brand stepped up to provide Walter O’Malley with the funding needed to construct the stadium following the team’s move from Brooklyn to Los Angeles. For many years, it was the only brand visible at Dodger Stadium.

“76 has been part of the Dodger team since the earliest days in Los Angeles. We’re beyond thrilled to extend this historic sponsorship and return the iconic 76 logos to their original positions on top of both scoreboards, just like when the stadium opened,” said Michael Wandell, the team’s senior vice president of global partnerships.

The logo was reinstalled on the current scoreboard on July 3, ahead of 7/6 Day celebration, when 76 celebrated 57 years of sponsoring the Los Angeles Dodgers.