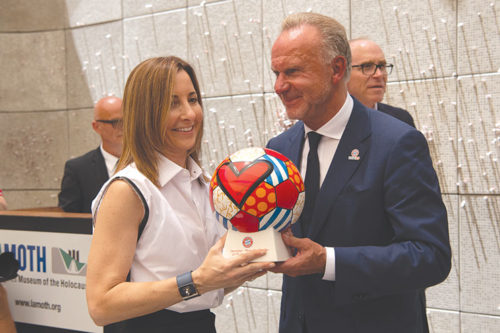 The Los Angeles Museum of the Holocaust and FC Bayern Munich present the U.S. debut of the exhibit “Venerated – Persecuted – Forgotten: Victims of Nazism at FC Bayern Munich” running through September.

On July 16, LAMOTH hosted an opening event for the exhibit that included FC Bayern Munich CEO and Executive Board Chairman Karl-Heinz Rummenigge, who was also a famous soccer player in Europe in the 1980s.

Curated by FC Bayern Erlebniswelt (Germany’s largest club museum), the exhibit highlights the heart-wrenching stories of nine players and officials who were persecuted and murdered by the Nazis because of their religion or political views. It includes the saga of Jewish Club President Kurt Landauer, who was forced to resign his post and was imprisoned in Dachau. Following his exile, he returned to Munich after the war, only to find his beloved team in shambles. Landauer led the effort to rebuild the stadium and the club. He is remembered as one of FC Bayern Munich’s most important figures and an important contributor to the club’s success.

“The exhibit includes a series of large panels containing historical photographs, biographies and maps illustrating the paths taken by team members when they fled or were deported from Germany.

“FC Bayern Munich is over 119 years old, and some of the values we hold dear today such as respect, responsibility and family were instilled by the players and officials featured in this exhibition,” said FC Bayern Munich’s President of the Americas Rudolf Vidal. “Through their stories we want to educate and inspire people as well as showcase the power of soccer and how it can create positive change in communities.”

“We are thrilled to host FC Bayern’s fascinating exhibit in its first appearance outside of Europe,” added LAMOTH CEO Beth Kean. “The exhibit shows how the Nazis’ oppressive and discriminatory policies reached all aspects of society, including sports. FC Bayern has done an admirable job of bringing attention to the suffering of Jewish club members under the Nazis as well as the resilience of club leaders like Kurt Landauer.”

The exhibit coincides with FC Bayern Munich’s summer tour of the United States.

Admission to the museum and the exhibit are free. LAMOTH is located at 100 The Grove Drive. For information, visit lamoth.org.

Storytelling, song and family fun at the Skirball