Envisioning the future of Hollywood 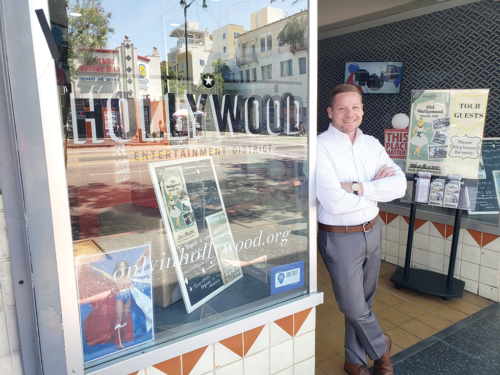 Kris Larson was named president and CEO of the Hollywood Property Owners Alliance in February. (photo by Cameron Kiszla)

When Kris Larson took the helm of the Hollywood Property Owners Alliance in February, he had his work cut out for him. He was replacing Kerry Morrison, who spent more than two decades building the group “basically from scratch,” Larson said.

“It was big shoes for me to fill,” Larson added.

The organization manages the Hollywood Entertainment District property business improvement district, an organization that uses assessments placed on real property to fund improvements in the area, generally located between La Brea Avenue and the Hollywood (101) Freeway to the east, and from Yucca Street to Santa Monica Boulevard.

The Hollywood business improvement district is one of the largest such groups in the state in geographic size and in terms of its budget, $7.4 million per year.

Now, he’s bringing his attention to Hollywood and working on the BID’s primary goal of creating “a safe and clean place.” The Hollywood BID contracts security services and teams that clean the area daily, beginning at midnight each night, Larson said.

“It’s not the sexiest work in the world, but it’s stuff that I think everybody values once they’ve seen the difference between a clean city and a dirty city,” Larson said.

The organization also provides outreach to people experiencing homelessness and is currently conducting a survey of the dozens of services available for homeless people to see where there might be redundancies or gaps. All of those efforts are part of the day-to-day services needed to make Hollywood an attractive place for businesses, visitors and residents, Larson said.

Hollywood has undergone a revitalization over the past two decades, highlighted by milestones like a reinvigorated Pantages Theatre, the opening of the W Hotel near Hollywood Boulevard and Vine Street in 2010, and companies like Netflix and Viacom making Hollywood the center of the entertainment industry once again, Larson said.

Hundreds of new housing units are also in the pipeline for the area, and an expanding arts scene includes several concurrent Broadway shows, including productions of “Hamilton” and “Rock of Ages,” that will come in the next few months to Hollywood Boulevard.

In Larson’s view, the BID’s job is to maintain the forward progress.

“I think right now, we’re just really continuing that trend of reinvestment, and in some ways, it’s about recapturing the essence of Hollywood,” Larson said.

For Larson, he looks to Hollywood’s deeply rooted history in the entertainment industry, which can be used to help develop the neighborhood as a place where people want to live, work and spend their time.

Rana Ghadban, president and CEO of the Hollywood Chamber of Commerce, said the placemaking efforts are “extremely important.”

“It’s something that’s very much needed, not only for our tourists, but for our locals,” Ghadban said.

Larson said the Hollywood BID is studying how to create more tree-lined streets, and the organization has already strung decorative lights above Cahuenga Boulevard, an aesthetic it wants to expand to other streets. 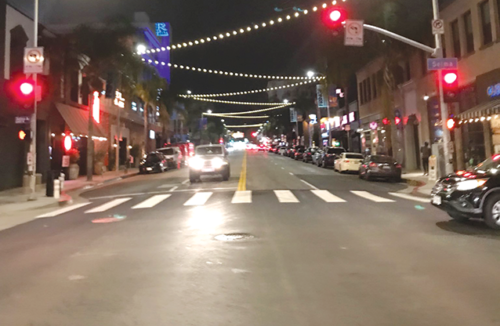 The decorations are a part of the HPOA’s strategic plan, called “Hollywood in Focus,” that the organization expects to finish this summer. The ultimate goal is to bring Hollywood’s star power to the forefront in a way that benefits tourists, residents and businesses.

“Those lights … create a photo ceiling, so as you’re moving up and down that corridor, it gives it a very distinctive flair, right?” Larson said. “The next step in that is thinking like, ‘Well, how do we create more of these moments that really embody that theatrical nature of Hollywood?’”

Placemaking is also a goal of the HEART of Hollywood initiative from Los Angeles City Councilman Mitch O’Farrell, 13th District, which aims to improve the areas of Hollywood Boulevard between major intersections to help the entire street thrive. Informative signs now direct visitors to local points of interest, and the Hollywood Walk of Fame Master Plan will give the landmark a $4-million renovation and improvement.

“My HEART of Hollywood Initiative is all about good design serving as a catalyst for positive change in this historic neighborhood,” O’Farrell said. “I look forward to working with Kris Larsen and local residents to develop that vision.”

At 9:59 a.m. on July 18, the description of the business improvement district was clarified.