Enjoy a ‘Brew at the Zoo’ with the animals and friends 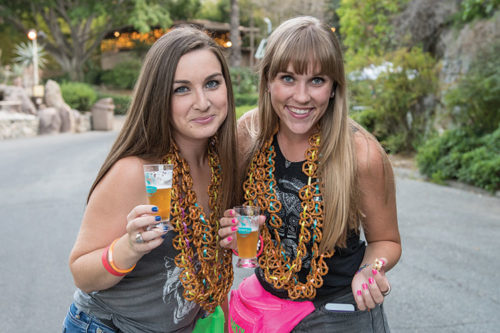 The Los Angeles Zoo is hosting its ninth-annual “Brew at the L.A. Zoo” event on Friday, Aug. 2, from 7 to 11 p.m. The zoo partnered with Simmzy’s Pub to create an exclusive brew.

The zoo’s resident Linné’s two-toed sloth, a species known for slow and methodical movement, selected ingredients for this year’s special brew. When recently presented with a selection of flowers, fruits and vegetables, Charlie the sloth, perused the items and selected rose and pear as a preferred snack. They were used as the main ingredients for the limited-edition brew.

Simmzy’s brewmaster Brian Herbertson created the custom beer in the German Kolsch style, which is a hybrid between an ale and a lager, with added rose hips and pureed pears. The beer will also be available for a limited time at Simmzy’s locations.

“I’m very excited about this beer and had a lot of fun naming it, which ended up being a play on words with another well-known German beer named Löwenbräu, which translates to ‘lion’s brew,’ so we created a sloth’s brew and named it Slothen Bräu,” Herbertson said.

“Brew at the L.A. Zoo” pairs breweries and cideries with food, games, live music, DJs, and wildlife. Visitors can sample different styles of ales, porters and stouts, as well as more obscure varieties. Special animal encounters and feedings will be held, along with entertainment by the 1980s and ‘90s cover bands Boombox Heroes and Saved by the ‘90s, and DJ Johnny Hawkes spinning a mix of hip hop, indie and dance music. Guests can get into the act, with live karaoke band Casual Encounters and unwind in the glamping lounge with a round of life-size Connect 4 while listening to an eclectic mix of music. A large selection of pub-style grub will also be available for an additional charge.

The event is open to individuals 21 and older. Advance online tickets are $65. Designated driver admission is $35 and includes unlimited soft drinks. General admission tickets are $75 at the box office, and $35 for designated drivers. The box office opens at 6 p.m. VIP admission (available online only) is $135 and includes early entry at 6 p.m. and access to exclusive lounges, all breweries, giveaways, hors d’oeuvres, specialty cocktails and an elephant keeper talk.