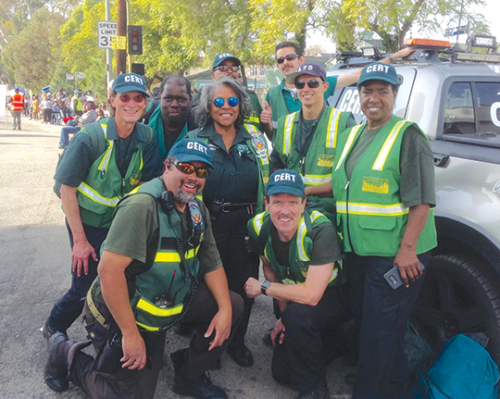 In the wake of two earthquakes that shook the area on July 4 and 5, as well as numerous aftershocks, authorities are calling for better emergency preparedness and more involvement by neighborhood councils.

Los Angeles Mayor Eric Garcetti launched a campaign on July 12 that tasks neighborhood councils with appointing preparedness officers who will serve as liaisons between city entities such as the Emergency Management Department and community members. As the recent earthquakes demonstrated, the key to reducing the impact of disasters is preparation, he said.

“Los Angeles is a model of preparedness, yet we cannot wait for an earthquake, fire or flood to jolt us into action. We have to empower neighborhoods to be ready before the next disaster strikes,” Garcetti said. “Resilience is everyone’s responsibility, and [this] is a direct challenge to all Angelenos to stay informed, remain alert and ensure emergency preparation is woven into the fabric of our communities.”

The plans involve getting to know neighbors, mapping neighborhoods and determining where vulnerabilities exist. That includes identifying where elderly or disabled persons live who might need special help during or after an emergency, determining where gas shut off valves are located, and knowing who to contact for help. Authorities warn that service providers such as the fire and police department will be inundated after a disaster, so it may be up to residents to help themselves and others. People are warned to have food and water to last at least 72 hours, as well as other necessities such as medication, flashlights, extra batteries, clothing and shoes, tools, hygiene supplies, a whistle to signal for help and contact information for loved ones.

“It’s normal to feel nervous or worried about what could happen if a strong earthquake impacts our county,” said Kevin McGowan, director of the Los Angeles County Office of Emergency Management. “The best way to calm any fears and rest easy at night is to equip yourself with knowledge about what to do before, during and after an earthquake.”

Neighborhood councils in the local area are already focused on emergency preparedness, and representatives agreed it will likely make a difference when disaster strikes. Mid City West Community Council Chair Scott Epstein said the council will consider who to appoint as an emergency preparedness officer and is in the process of acquiring more information about the program.

“I think it’s an important thing to work on. Everybody needs a plan and a lot of people don’t know what they need to do to prepare,” Epstein said. “I have lived here for 12 or 13 years and never experienced shaking like that, especially the second one. Community engagement and education is always important and is something we need to be involved with.”

Anastasia Mann, president of the Hollywood Hills West Neighborhood Council, said emergency preparedness is of critical importance within the council’s boundaries. The council, the city’s largest, represents 65,000 homes and businesses and approximately 200,000 to 220,000 people in an area stretching from Studio City to Sunset Boulevard, and from Griffith Park to West Hollywood.

“We had a massive presentation on emergency preparedness in February as a result of the fire season and the danger we face because we are in the hills. It’s not just earthquakes; being prepared is important for many reasons,” Mann said. “It’s really important for people to know what to do when a disaster strikes. They are complacent. This information should be provided to everyone. It’s something I take very seriously.”

Mann said the neighborhood council is in the process of setting up a network of representatives throughout its many sub-districts who will be responsible for disseminating information to individual households and businesses. Having a preparedness officer appointed could help expedite the process, she added.

Conrad Starr, who serves as resiliency officer for the Greater Wilshire Neighborhood Council and is president of the Sycamore Square Neighborhood Association, also said preparedness is an important part of neighborhood council service. He has been getting people involved with Community Emergency Response Team training and has been working with others to establish a communications network of ham radio operators who could disseminate information if phone lines and traditional networks were out of service. Starr said he would be willing to take on the duties of being a preparedness officer.

“It’s very important to take the basic steps needed for preparedness. Getting the word out in the neighborhood is key, and if people are interested, a lot of us are happy to step in and share our information,” Starr said. “Those of us who have lived here a long time know how important it is because we’ve been through that kind of shaking before. We’re grateful the recent earthquakes have given us more time to prepare so folks can take the basic steps.”

Starr added that the ham radio communications network could prove to be extremely valuable after a major earthquake. He encouraged people in the Wilshire area who are interested in joining the network, and those seeking preparedness information, to email him at sycamoresquare@greaterwilshire.org.

Local city officials also stressed the importance of preparedness. The public can visit emergency.lacity.org for information.

“The city of Los Angeles continues to build on its resiliency, preparedness and public safety,” said Councilman David Ryu, 4th District. “But a city is only as prepared as its people. When the Big One hits, whether it’s a fire, flood or earthquake, every community in Los Angeles needs to be prepared. That’s why programs like RYLAN are so important. It gives our neighborhoods an emergency plan now, so they’re ready whenever disaster strikes.”