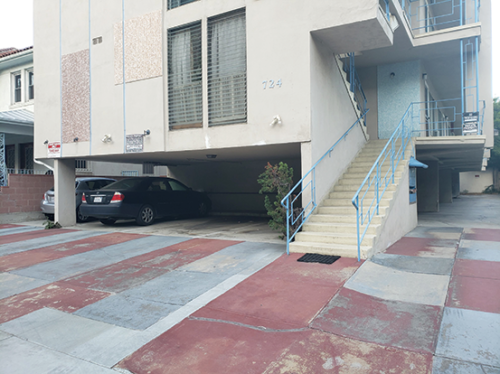 Soft-story apartment buildings, which feature open walls to allow cars to park beneath the building, can be especially hazardous in an earthquake. (photo by Cameron Kiszla)

Last week, two major earthquakes that struck the Mojave Desert were strong enough to be felt more than 100 miles away in Los Angeles.

Near the temblors’ epicenters, there was property damage and one possible earthquake-related death in Nevada, but in Los Angeles, no major damage was reported.

Joseph Ramallo, a spokesman for the Los Angeles Department of Water and Power, said the only earthquake-related issue the LADWP experienced was a recently repaired water pipe that broke again during the second earthquake on July 5.

That broken pipe, located near Wilshire Boulevard and South La Jolla Avenue, only led to about 20 customers losing water for a few hours, Ramallo said.

Still, area residents are using the occasion to learn more about temblors and stock up on emergency supplies, and government officials are encouraging preparatory action as well. U.S. Rep. Adam Schiff (D-Burbank) continued to push for additional money for the West Coast earthquake early warning system – also known as ShakeAlert – that could provide enough of a warning to allow people to find proper shelter.

Another governmental push, this one by cities, may save countless lives and thousands of homes if the work is completed in time. Soft-story apartment buildings, which have wood frames and allow for cars to be parked beneath overhanging units, require seismic retrofitting in Beverly Hills, West Hollywood and Los Angeles, and the cities have already begun requiring the necessary work.

Soft-story buildings are especially vulnerable to earthquakes, which can cause the upper floors to collapse onto the lower levels. In the 1994 Northridge earthquake, two-thirds of the 49,000 housing units Los Angeles lost were due to collapsed soft-story apartment buildings, according to the Public Policy Institute of California.

In Los Angeles, there are nearly 14,000 soft-story buildings, and Mayor Eric Garcetti has made it a priority to see that they’re all properly retrofitted to prevent or lessen damage in an earthquake.

Jeff Napier, chief inspector with the Los Angeles Department of Building and Safety, said the city started notifying property owners of the requirement to retrofit in 2016, and most soft-story buildings are on track to be completely retrofitted by 2024, though buildings that will require seismic retrofitting are still being discovered.

As of June 3, the most recent date for which data is available, approximately 20 percent of Los Angeles’ soft-story buildings – more than 2,300 structures – have been seismically retrofitted, and another 7,000 buildings are on track to complete their retrofit within the next four years.

To help pay for the expensive fixes, which can run into the tens or hundreds of thousands of dollars, depending on the size of the building, the city’s seismic retrofit website directs Angelenos to look into the California Capital Access Program, which could provide a loan to help soft-story building owners pay for the necessary seismic retrofits.

In Beverly Hills, only approximately 300 buildings need retrofitting, said Arlen Eskandari, a senior plan review engineer with the city’s Community Development Department. The city sent a notice to comply with the soft-story regulations to all building owners on July 1, Eskandari said, and the owners have a year to submit their plans to the city.

“The goal of the ordinance is to make the buildings safer. It’s not making it earthquake proof, but they’re retrofitted for the right safety and performance level so the occupants will have enough time to get out of the building,” Eskandari said.

Beverly Hills is also offering an incentive to owners to get their retrofitting done quickly. If the work is done in the next year and a half, the city will refund the building permit fees, which are calculated based on the size of the building.

“The perfect system is going to cost a lot more and a lot more work, but this is kind of the basic retrofit so it meets the right safety performance requirements,” Eskandari said.

In West Hollywood, a seismic retrofitting seminar hosted by the city and the West Hollywood Chamber of Commerce is planned for July 13 at 11 a.m. at Plummer Park’s Fiesta Hall, located at 7377 Santa Monica Blvd.

Additionally, the city is working on a way to defray some of the construction costs. In April, the City Council voted to reduce building permit fees for apartment building seismic retrofit projects by 25%, and the city is applying for two FEMA Hazard Mitigation Grants, one for $5 million and another for $10 million.

“We might get the whole amount we requested, we might get a portion or we might not get any,” said Ben Galan, the city’s building and safety manager.

If awarded grant money, the city will provide 25% of the amount as its matching contribution.

The city wants to use the grants to help offset the cost for seismic retrofitting for the city’s 738 soft-story buildings. Property owners will still have to pay for at least 25% of the project, but they can receive between $2,000 and $4,000 for the project’s design and between $10,000 and $15,000 for construction.

Galan said after the recent earthquakes, some West Hollywood tenants have called the city to ask about the seismic retrofit status of their buildings.

The time to shore up at-risk buildings is before an earthquake, Galan said, and this program aims to be “proactive.”

“Buildings aren’t earthquake proof, but retrofitting buildings will protect the lives and safety of people in West Hollywood and will lessen the economic impact,” he said.