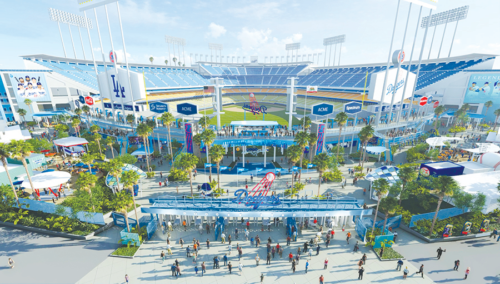 The Los Angeles Dodgers have announced plans for the creation of a new Centerfield Plaza and renovations to the Left and Right Field Pavilions as the club continues to enhance the league’ third-oldest ballpark with modern and fan-friendly amenities. The projects are expected to be completed in time for the 2020 season, when the Dodgers will host Major League Baseball’s All-Star Game presented by Mastercard.

“Dodger Stadium has always been and remains the most beautiful place ever built to play or watch the game of baseball, and these renovations will enhance every aspect of the fan experience with modern and family-friendly amenities,” said Dodgers President and CEO Stan Kasten. “This latest project continues to demonstrate ownership’s commitment to give a first-class experience to the best fans in baseball.”

The stadium improvements will include a new Centerfield Plaza which will serve as the stadium’s “front door.” It will feature nearly two acres of food offerings, entertainment and children’s areas, retail spaces, sponsor activities, more social and standing room and greater access for people with special needs. Fans will be able to enjoy the game on top of a newly-constructed “batters eye wall.” The new Centerfield Plaza will pay homage to Dodger history with statues and serve as a permanent home for the Legends of Dodger Baseball plaques.

Renovations to the Left and Right Field Pavilions will include enclosed bars with views into the bullpen, the creation of standing room areas at the top of each pavilion, new restrooms, enhanced ADA seating and “home run seats” just beyond the outfield wall.

Elevators are currently under construction in the Right and Left Field Plazas to help move fans more easily to and from the new Centerfield Plaza. Additionally, bridges will be constructed to connect the new pavilion standing room decks to the rest of the stadium, creating a 360-degree connection around the park’s perimeter. The new elevators and bridges will also provide easier access to the Dodger Stadium Express stop in Lot G through the Centerfield Plaza.

The Dodgers are also adding a new sound system that will replace the current speaker tower and provide an enhanced audio experience on all levels of the ballpark. The team will also honor Hall of Fame left-handed pitcher Sandy Koufax with a statue, the second at Dodger Stadium following the dedication of the Jackie Robinson statue in 2017. Both statues will be located in the Centerfield Plaza, as the Robinson statue will be re-located from the Left Field Reserve Level.

The Dodgers remain committed to modernizing Dodger Stadium while maintaining the midcentury modern architecture that defines the venue. Under the ownership of Guggenheim Baseball Management since 2013, Dodger Stadium has undergone a series of fan-friendly improvements including the creation of two new entrance plazas on the field level, tiered seating and bar areas overlooking both bullpens, two new HD video screens, new team stores, wider concourses, renovated restrooms, enhanced concessions and children’s play areas. There have also been structural and behind-the-scenes upgrades to Dodger Stadium’s infrastructure as well as the construction of new home and visiting clubhouses, batting cages and weight rooms.