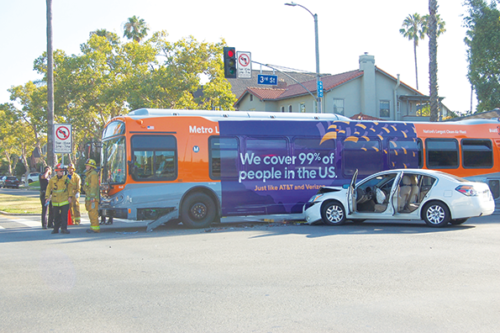 A sedan collided with a Metro bus at approximately 7:50 a.m. on Wednesday, July 24, at Highland Avenue and Third Street, causing traffic delays during the morning rush hour.

Los Angeles Fire Department paramedics took the unidentified driver of the sedan to a hospital, said LAFD spokesman Jeremy Carter. None of the approximately 15 people on the bus were injured.

Fire department personnel checked the passengers as they exited the bus. Detectives from the Los Angeles Police Department’s West Traffic Division are investigating the collision, and the outcome of the investigation will likely not be available for days. The bus was traveling west on Third Street. A passenger on the bus who declined to provide her name said the sedan was traveling east and attempted to turn north on Highland Avenue when it struck the bus.

No further details were available.