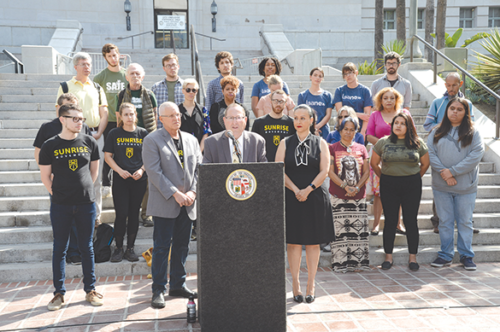 With the support of Councilman Koretz, 5th District, and the Leap LA Coalition, the Los Angeles City Council on July 3 created the Office of Climate Emergency Mobilization, the first in any municipality in the world.

The office’s primary responsibility will be to address climate change and pollution. The CEMO will be tasked with creating a climate emergency mobilization implementation plan to reduce the city’s greenhouse gas and toxic pollution emissions.

The motion to create the CEMO was co-authored by councilmen Koretz and Bob Blumenfield, 3rd District. The United Nations Intergovernmental Panel on Climate Change report released last October stated that there are less than 12 years left to drastically reduce greenhouse gas and toxic pollution emissions or temperatures could rise annually by 1.5 degrees Celsius (2.7 degrees Fahrenheit).

The city will create the Office of the Climate Emergency and initiate the hiring process for a director. It also establishes a Climate Emergency Commission and Community Assemblies in which communities will provide leadership in shaping the city’s climate emergency mobilization implementation plan. Additionally, it instructs city staff to draft the official Climate Emergency Declaration.

“The question we keep hearing is, ‘after a city declares a climate emergency, now what?’” Koretz said. “The Leap LA Coalition and the city of Los Angeles are providing what we hope to be an effective and inclusive roadmap forward on how to address the climate emergency at the speed and scale necessary, with leadership and wisdom from the frontline and indigenous communities who are already feeling the extreme impacts of fossil fuel pollution. And it is essential that we prioritize a truly just transition for any workers whose jobs are affected by positive climate action.”

The office is in the formative stages and information was not available about the number of staff and how they will be selected. For information, visit councilmemberpaulkoretz.com.