Changing of the guard for LAPD in Hollywood 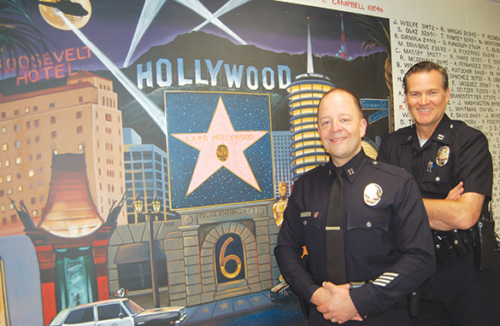 Capt. Steve Lurie (left) will be the new commanding officer of the LAPD’s Hollywood Division, succeeding Commander Cory Palka, who will be assigned to the department’s Operations West Bureau. (photo by Edwin Folven)

A change in leadership is coming to the Los Angeles Police Department’s Hollywood Division on Aug. 4, as the current commanding officer, Cory Palka, has been promoted to commander and will serve in the department’s Operations West Bureau, which oversees six police stations in the central and western portion of the city.

Palka will be succeeded by Capt. Steve Lurie, who currently serves as commanding officer of the Hollywood Division’s patrol operations. Palka expects the transition will be smooth, as Lurie has already worked at the station for the past year and has made many connections with the community. He said being commanding officer in Hollywood over the past three and a half years has been one of the most rewarding experiences of his life.

“Hollywood is a relationships division. The amount of relationships I’ve made in Hollywood, I’ve never seen anything like it,” Palka said. “I have never had a job like being the Hollywood police captain. It will go down in my life as the greatest job I’ve ever held, and my gratitude is through the roof to have had the ability to serve here. It’s fun, it’s exciting, challenging, it’s an enormous responsibility and we take our desire to serve this community very seriously.”

Palka, who has served with the LAPD for 33 years, said he will be working on the “processes of policing” at a higher level with Operations West Bureau, which oversees the Hollywood, Wilshire, Olympic, West Los Angeles, Pacific and West Traffic divisions. He previously served as commanding officer of the LAPD’s 77th Street Division and worked numerous details during his law enforcement career, including as a vice officer in Hollywood in the 1990s.

Lurie, 48, was born in New Brunswick, New Jersey, moved to the Los Angeles area with his family when he was a youth and grew up in Torrance. A UCLA graduate, Lurie also has a juris doctorate degree from Loyola Law School and is a member of the California State Bar. He has also attended the Federal Bureau of Investigation National Academy in Quantico, Virginia.

Lurie first served with the El Segundo Police Department from 1995-97 before joining the LAPD. He has worked numerous assignments during his 22 years with the department.

They include helping to develop the department’s system for critical infrastructure protection following the Sept. 11, 2001, terrorist attacks. Lurie also served as a detective investigating robberies, sex crimes and homicides, and as a sergeant in the Wilshire and Southeast divisions. Additionally, he has worked for a detail that investigated officer use-of-force incidents. Lurie was promoted to the rank of captain and assigned to his most recent post overseeing Hollywood Division’s patrol operations in 2018.

“Hollywood is so unique and so complex, so it has been nice getting to know the community members and the team members here at Hollywood Division, and the people in the neighborhood who are making a difference,” Lurie said. “I am excited to step into the role and lead the station into the future.”

Lurie said he wants to focus on increasing the number of officers assigned to the Hollywood Boulevard foot beat, and to expand the foot beat to other places in the division.

“We have a small foot beat on Hollywood Boulevard and I want to greatly expand that. I am from the East Coast where you see cops walking down the street everywhere. I think we need to do more of that,” Lurie added. “Number two, I want to place a priority on getting community members involved. We have a good program in Hollywood for volunteers and there are many things they could help with. There is no reason why a trained community volunteer can’t assist at the front desk taking non-emergency crime reports. It frees up resources. There are a lot of things they can do at the station.”

Lurie added that the Hollywood Division has a volunteer patrol that offers an extra layer of security in the community, and expanding it will likely be another component of his plan.

“They are another set of eyes out there in the community,” he added. “That is something that could also be very helpful.”

He added that he is excited to get started.

“I’m looking forward to my new role and am grateful to have been given the opportunity,” Lurie said.

Caption polka will be missed especially around baseball season. If you need decorations in your office please let me know. Thank you