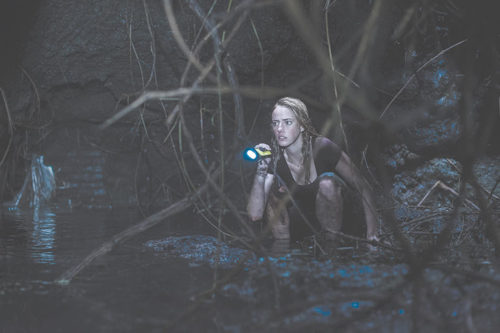 Kaya Scodelario, as Hayley, is the heroine in “Crawl,” a fun new horror film that can help audiences beat the summer doldrums. (photo courtesy of Paramount Pictures)

When a hurricane rolls in, beware all the uprooted gators ready to make you a “Florida man” headline once the weather settles. In the long tradition of nature-vs.-human stories that ignore how animals (and hurricanes) really behave, “Crawl” outlandishly exploits a subgenre for a few good scares in what feels like quite the abridged summer film.

At less than an hour and half, things occur at double time. A little backstory to kick things off, impending hurricane, all necessary exposition provided by weather updates and the occasional local officers. By 20 minutes in, the first mean green arrives, and heroine Hayley (Kaya Scodelario) must drag her injured father Dave (Barry Pepper) across a grimy basement in a house slowly filling with water.

Occasionally, help comes their way, but these hefty lizards ain’t acting normal. Oh wait, according to Dave, a gator encyclopedia, this is all normal and can be combated with the correct tactics. I truly didn’t know four or five alligators normally hunt together and quarter a man. How hard is a throwaway line like “these things ain’t acting normal.” Then, all they have to do is cut to a meth lab and reveal a local dumping problem. Trashy disaster movies have been doing this for years.

Back to the story. Dear daughter and father have some issues to work through: a divorce, estrangement and dad’s aggressive coaching of Hayley’s swimming. Oh yeah, she’s an amateur swimmer. She could be amazing, but the yips overpower her, thanks to years of family drama. Whelp, she might just have to get over that and out swim some amphibious monsters in their home turf. Oops, did I give away the most telegraphed moment?

To be honest, originality and realism play second chain saw to entertainment in a film overflowing with hungry critters and powerless muggles. And Aja does that bit wonderfully. He’s had practice. His breakout slasher, “High Tension,” is a grisly affair that rationally makes no sense. A twist reveal undermines the entire film, but it doesn’t eliminate just how demented and scary it is.

Alas for “Crawl,” thrills do occur, but it’s hardly an amazing ride. All those predictable moments and glaring discrepancies become less forgivable without much else to compensate for them.

To his credit, this one rates lower than Aja’s flicks on the violence scale, only featuring a couple decapitations, one dismemberment, one lost limb, a couple carcasses and maybe three or four ambiguous pools of blood. That’s nothing compared to a mountain of jarring visuals from a director lauded as a member the Splat Pack, a grouping of gore-loving filmmakers.

Rather than merely conclude that “Crawl” isn’t worthy, I instead have a few points in support of watching it now. It’s better than many B monster movies, from those that sneak into theaters (hi “The Meg”) and all those painfully outlandish home releases, including “Mega Shark,” “Lake Placid” sequels and each and every “Sharknado.”

“Crawl” reads like a first-year horror writer’s tutorial, but the acting, graphics, pacing and, oddly enough, emotional emphasis ain’t bad. And, the final moments work quite well. Some acclaimed horror films can’t even boast that. Might I remind you that more theaters now serve alcohol, which changes the game. Turn it into a drinking game, enjoy some laughs, even intermittent jolts, and beat the summer heat with “Jaws” lite.

Artful and flavorful fare at LN2