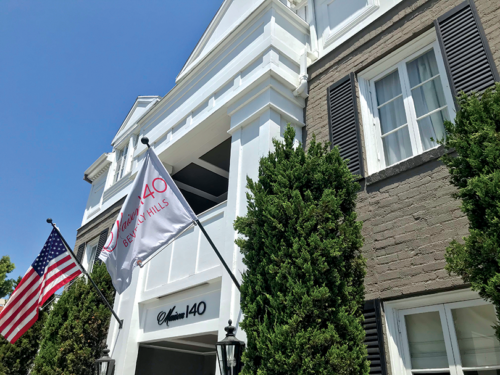 A new, four-story hotel with a net increase of 28 rooms on South Lasky Drive would replace the Maison 140 Beverly Hills, increasing the number of hotel rooms in Beverly Hills. (photo by Ryan Mancini)

The Beverly Hills Planning Commission voted unanimously on July 25 to recommend an ordinance to the City Council to amend the municipal code on the room limit of hotels within the city.

The ordinance would remove the 1,000 hotel room cap approved by the city on Nov. 1, 1984. By eliminating the cap, assistant director of community development and city planner Ryan Gohlich said it would create a freer market and open up competition.

A staff report submitted to the Beverly Hills City Council on May 21 by Gohlich stated the total number of hotel rooms approved for construction in Beverly Hills was at 832, with 289 proposed but not yet approved for construction. This includes the proposed development of an unnamed eight-story, 195-room hotel on La Cienega Boulevard and the 94-room Lasky Hotel. That raises the number of rooms since the law was passed to 1,121, above the limit.

However, because the ordinance only applies to hotel rooms approved since the 1984 law was passed, the total number of hotel rooms is around 2,300, Gohlich said.

“As far as hotels that are either approved and not yet built, or are going through the planning process right now, there are a total of approximately 549 rooms in the pipeline,” he said.

The report also provided an environmental assessment in accordance with the California Environment Quality Act. Due to minor alterations in land-use limitations and no changes in land use, related amendments will not have a significant environmental impact.

An exact date for when the ordinance will move forward has not yet been determined, according to Beverly Hills Public Information Manager Keith Sterling.

“We have not set a date yet, but it will be September at the earliest, due to the 20-day noticing requirement for the ordinance,” Sterling said.

A 20-day notice is required, Gohlich said, based on how much time is required for the zoning code to be amended.

“Up until about a year or so ago, the noticing requirement was 10 days, and that was doubled by the City Council in an effort to improve transparency by providing the public with greater notice and time to [prepare] for public hearings on items they may be interested in,” he said.

During a May 21 study session, the Beverly Hills City Council directed the planning commission to consider striking the law and directed staff to work with the planning commission to process an amendment to remove the cap. City Councilman Julian Gold said the cap was “at best arbitrary.” City council members added that any identified negative impacts of a hotel development should be “addressed on a case-by-case basis when an applicant seeks a conditional use permit to construct a hotel, rather than being addressed through a blanket cap on hotel rooms,” according to the report.

Council members agreed that, among several factors, the “nature of the economy” had changed since the 1984 law was established.

“Removing the hotel room cap will provide new opportunities for hotel developments in the city,” the report read. “Any new development will require the planning commission to grant a conditional use permit, at which time specific conditions can be imposed on the project to address any concerns about negative impacts.”

A public comment voiced opposition to changing the municipal code, stating it would “result in increased density and traffic problems.”

Sterling said he expects the city council to hold a lengthy discussion by the time the ordinance comes forward.