Beverly Hills goes for the BOLD 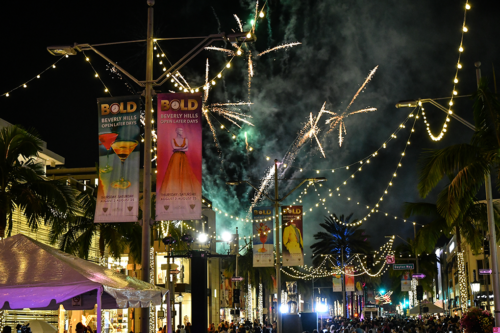 Fireworks go off over Summer BOLD, one of two programs held to extend shopping hours for businesses along Rodeo Drive and provide entertainment for shoppers. (photo courtesy of city of Beverly Hills)

As the temperature rises, so does anticipation for Summer BOLD in Beverly Hills, the city’s “open later days” programming beginning Aug. 1.

“I think the variety of programming is so dynamic and unique that it creates a must-see experience,” Councilwoman Lili Bosse said. “Each season, we work to elevate the campaign and I’m confident we have done it again this summer.”

BOLD’s goal is to provide guests late-night entertainment, as well as encourage businesses to remain open past their normal closing times.

Once the four-week Summer BOLD ends, data will be tallied to help gauge the success. Since 2017, data based on several key points such as foot traffic, social media posts and hashtags, and hotel room occupancy have been gathered following both Summer BOLD and BOLD Holidays campaigns.

After 2019’s BOLD Holidays season comes to a close, all data will be added to information that the city gathered in 2017. From there, the focus will be to determine how the program will further help businesses, attract future revenue for the city, provide experimental programming and help assist local businesses with supportive marketing, according to the staff report on BOLD’s metrics delivered to the Beverly Hills City Council on March 5.

The report also noted how the Metro’s Purple Line Extension subway project is expected to impact both foot traffic and business revenue. Phase 2 of the construction, which will be located near Rodeo Drive, is scheduled to conclude by 2025.

“We will continue to work closely with Metro to mitigate any potential impacts to pedestrian access during BOLD events throughout the construction period,” said Keith Sterling, public information manager for Beverly Hills.

The Next Beverly Hills Committee also collaborated with the Summer BOLD 2018 program to gather data focused on digital advertising and promotion via social media platforms, such as a custom event filter on Snapchat, a 9.2% increase followership on Instagram, organic outreach of 27,000 people on Facebook and responses submitted on Yelp, according to the report.

Other data collected in the past came from the Beverly Hills Conference and Visitors Bureau, which received data on hotel night confirmations and how much travelers spent on average. The total amount spent by travelers for Summer BOLD 2018 was estimated at $527,088.

This year’s estimated budget for Summer BOLD is approximately $1.6 million, as it was in 2018, and larger than that of the inaugural program, which was originally $992,710.

While the last few years have been deemed a success by the city, any immediate estimates for this year’s Summer BOLD have not been determined, according to Beverly Hills Mayor John Mirisch.

“Data is good,” he said. “Let’s look at it and not jump the gun. It will be beneficial, but you’re not going to want to prejudge.”

This year’s Summer BOLD begins Aug. 1 with a series of music performances along Rodeo Drive, culminating in a fireworks display. The program will also debut temporary art installations by artists Janet Echelman and Mr. Brainwash.

“The incredible energy that BOLD brings to Beverly Hills is exhilarating,” Bosse said. “When I walk down Rodeo Drive surrounded by thousands of smiling people enjoying our city, it’s truly heartwarming.”

Bosse, who led the effort to create BOLD, said the program was created to take Beverly Hills beyond “business as usual.”

“We know BOLD has already had a strong impact in just its first few years with over 4 million visitors from last summer through January of this year,” Bosse said. “The numbers have exceeded my expectations and I’m so proud of what we’ve accomplished.  We’ll continue to review the data with our community partners and explore enhancement opportunities.”