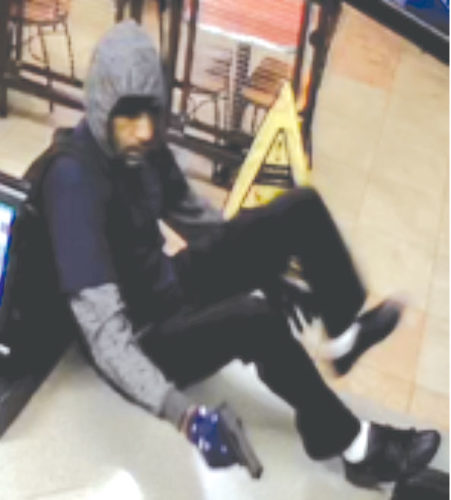 (photo courtesy of the LAPD) Police released a security camera image of the suspect taken during one of the robberies.

Police are searching for a male suspect wanted for a robbery spree that includes multiple hold-ups in the Los Angeles Police Department’s Wilshire Division.

The spree began on Jan. 9 at an undisclosed location and the latest hold-up occurred on July 15 at a Jack in the Box in the 400 block of South Fairfax Avenue. The suspect is considered armed and dangerous, said Det. Gerry Chamberlain, with the LAPD Robbery-Homicide Division.

“The investigation is ongoing and we are still trying to generate leads,” Chamberlain added. “There have been several robberies attributed to this same person that have occurred in the Southwest [Division] and also the Wilshire Division.”

The suspect is described as black, 30 to 40 years old, approximately 6 feet tall and 150 pounds.

The robberies generally have occurred during the early morning hours. Ten of the holdups have occurred in Los Angeles and one in Inglewood. Some of the locations have been robbed multiple times.

The suspect targets fast food restaurants and gas stations. He enters the businesses, pulls out a handgun and points it at employees. He usually jumps over counters and forces employees to give him cash from registers. In some instances, he forces them to open safes. No injuries have been reported.

The Los Angeles City Council has offered a $25,000 reward for information leading to the suspect’s arrest and conviction. Anyone who sees the suspect is asked to call 911. Anyone with information is urged to call detectives at (213)486-6840. During weekends and off-hours, call (877)LAPD247.