Anger over work on Beverly continues to brew 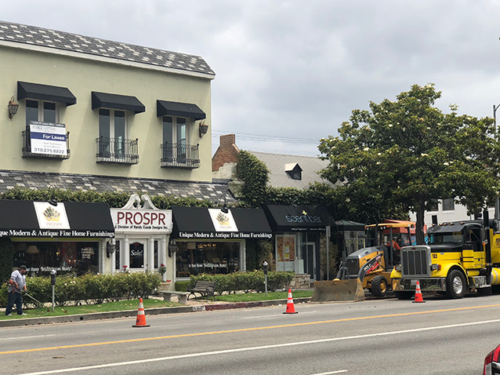 A construction project by Verizon Wireless has angered business owners in the 7400 block of Beverly Boulevard. (photo by Randy Esada)

Some business owners in the 7400 block of Beverly Boulevard remain outraged over a Verizon Wireless construction project that they claim has stymied business on Saturdays since early June.

Verizon has had crews working along the north side of Beverly Boulevard near Martel Avenue on Saturdays, installing what spokeswoman Heidi Flato described as upgrades to the communication company’s 4G network. It was initially believed that crews were installing equipment for a new 5G network, but Flato said she learned this week that the work involves the installation of fiber optic cables that are enhancements to the existing 4G network. Work will not occur this Saturday because of the Fourth of July holiday weekend, and the project is expected to be completed on the following Saturday, July 13.

A permit for the project was issued by the Los Angeles Department of Transportation because lane closures were necessary on the westbound side of Beverly Boulevard, near the sidewalk. Flato said Verizon understands business owners’ frustrations about disruptions and asked crews to do everything possible to shorten the duration of work. The project, which was originally scheduled to last six weeks, was shortened by two weeks.

News that the project was shortened and that there would be a one week respite over the Fourth of July holiday weekend has provided little solace for business owners. The Beverly Boulevard Business Owner’s Alliance has created the website bbboa.net, where other business owners are asked to share stories about negative effects they have experienced as a result of wireless telecommunications work and other construction. Some business owners are contemplating filing lawsuits seeking reimbursement for lost profits and damages.

“It’s an unbearable situation for the business owners and restaurants,” said Randy Esada, owner of Prospr, located at 7407 Beverly Blvd. “We think it’s bigger than just the 12 businesses on this block. It has an impact on the community.”

R.J. Milano, owner of Shaky Alibi, a coffee bar and restaurant at Beverly Boulevard and Martel Avenue, said the project has dissuaded customers from visiting and has impacted business. Milano added that he was not notified ahead of time about the construction so he could plan, and he is concerned about being able to pay and support his employees if business continues to decline.

“We were never told about it. One day, Martel was completely shut off and there hasn’t been any notice,” Milano said. “I employ eight people who entrust me so they can make a living. When something like this is going on for this long, it’s difficult for me.”

The business owners are also angry at Councilman Paul Koretz, 5th District, who they claim has not been doing enough to make sure the impacts of such projects are mitigated. Esada said he received information last week from a staff member in Koretz’s office that Verizon was going to suspend work for two weeks, giving businesses a respite on June 29 and July 6. When the crews showed up last Saturday, he felt betrayed. On the bbboa.net website, he called it “a low down dirty trick.”

Koretz’s spokeswoman Ali Simard said the councilman’s chief field and transportation deputy Jay Greenstein reached out to Verizon and was told that the work was going to be suspended for two weeks, and he relayed that information to the business owners. Flato, Verizon’s spokeswoman, disputed that assertion and added that she did not know where the “miscommunication” occurred.

Simard said Koretz and his staff are committed to constituents and no one intentionally tried to mislead anyone. The councilman’s office was not notified ahead of time about the project by Verizon or the city’s Department of Transportation, and Koretz was unaware of business owners’ concerns until staff started fielding complaints last week, Simard said.

“We are in talks with Verizon and the DOT and doing our best to smooth things out. Construction is always an inconvenience and Verizon did not alert our office that this work was beginning. Now, we are trying to get the neighborhoods involved and are asking the DOT [for notification]. We don’t want anybody to be inconvenienced.”

Esada added that he is worried once the project is finished on his block, similar projects will start in other locations and inconvenience other owners. Flato said she does not have information about any future projects and does not know if similar work will occur in other places. Meanwhile, the businesses are bracing for one final Saturday of business disruption and planning their next move.

“It’s a terrible situation,” Esada said. “It’s blown up in a way that is unimaginable.”

Plan would halt use of pepper spray in juvenile halls