American and Israeli teens innovate ways to remember the Holocaust 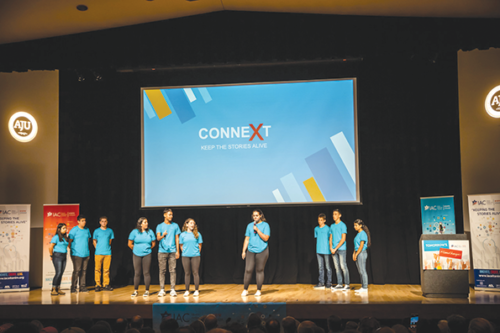 During the event, which was organized by the Israeli-American Council and held from June 30 to July 4, teenagers presented their original solutions to a challenging task: create an innovative, teen-oriented product to help keep the stories of the Holocaust alive.

Hackathon participants were placed in teams that emulated the start-up structure. They met with Holocaust survivors to hear and discuss their personal testimonies. Then, in an intensive five-day hackathon, they researched and developed solutions to engage their peers, with the ultimate goal of making the stories of the Holocaust accessible and meaningful for the next generation.

On July 4, teens presented their products in four-minute demos. The winning team, ConneXt, proposed an app with a range of features – including journey, chat, bios and share tabs – that would allow users to connect closely with the stories of the Holocaust.

Through the journey tab, users select the country, age and path of a survivor, granting them the ability to explore the experience of someone who was similar to them in age. Users could then select the chat feature, through which they would be able to message a Holocaust survivor and receive AI-crafted responses based on individual stories programmed into the app. Through this feature, the app would harness AI to keep testimonies alive. The app’s share tab would allow users to sign a petition to make Holocaust education mandatory in all 50 states when it is currently only required in six.

The mission posed by the Hackathon is especially imperative in an era when the Holocaust is increasingly fading from memory as firsthand accounts become scarcer and at a time of rising anti-Semitism, according to the latest comprehensive survey on Holocaust memory conducted by Schoen Consulting for the Claims Conference. The survey found that 66% of millennials have never heard of Auschwitz. The same percentage of respondents of all ages do not personally know or know of a Holocaust survivor.

“There is no limit to where these teens can go and what they can achieve,” IAC Co-Founder and CEO Shoham Nicolet said. “When I look at these teenagers and how IAC Eitanim is inspiring deep connections to their Jewish heritage and Israel, I see the future of our community leadership and am confident in their ability to make change in the world.”