AIDS Walk looks to prove disease has met its ‘march’ 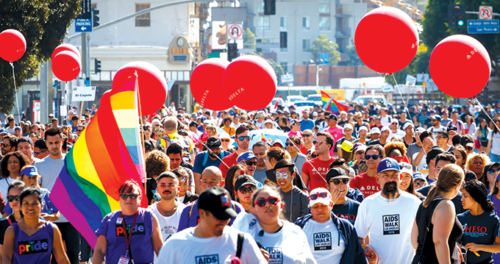 This October, thousands of people will march in the streets of Los Angeles to raise awareness and money for the fight against HIV/AIDS. (photo by Brian Lowe/courtesy of AIDS Walk Los Angeles)

Participants can now register for the 35th annual AIDS Walk Los Angeles, which will be held from 8:30 to 11:30 a.m. on Oct. 20 at Grand Park in downtown Los Angeles, and a newly launched website allows individuals and teams to sign up for free and begin to raise money.

“AIDS Walk Los Angeles is the premiere HIV/AIDS event to organize community, educate, bring awareness and work to end an epidemic,” said Craig Thompson, CEO of APLA Health. “We’ve made major strides in improving the health and quality of life for people living with HIV, but the disease has yet to be eradicated and our work continues. Our ask for this year’s walk is simple: Walk with us, talk with us and share your experience.”

This year’s AIDS Walk Los Angeles is the first to be managed in house by APLA Health, which was formerly known as AIDS Project Los Angeles and has been the beneficiary of the walk since its inception. The theme for the 2019 event is “AIDS Has Met Its March,” which calls upon participants to continue the fight in our efforts to make AIDS history. The walk is approximately four miles, starting and ending at the steps of L.A. City Hall, and takes about two hours to complete. The morning kicks off with an aerobic warm-up, followed by opening ceremonies featuring celebrities, musical performances and HIV/AIDS activists and leaders. A post-walk celebration congratulates walkers, volunteers and supporters.

Each year, AIDS Walk Los Angeles opens registration during Pride Month, when LGBTQ+ communities and supporters stand together to celebrate and advocate for inclusiveness and civil rights. Since 1985, hundreds of thousands of walkers and supporters have raised over $88 million in the fight against HIV/AIDS. These funds are a vital lifeline that sustains APLA Health, as well as other HIV/AIDS health and support organization beneficiaries.

“The HIV health services and support programs, HIV prevention programs, and advocacy we offer to the thousands of men, women and families affected by the disease in Los Angeles County are still as relevant today as they were when we opened our doors to help our first five clients in 1983,” Thompson said.